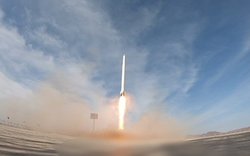 The satellite was placed into the orbit 425 kilometers above Earth’s surface.‎

The announcement was made on the day when the elite military force is marking the ‎anniversary of its establishment on April 22, 1979 upon an order by the late founder of the ‎Islamic Republic, Imam Khomeini.‎

Marking the occasion, the Supreme Leader of the Islamic Revolution Ayatollah Sayyed Ali ‎Khamenei expressed his gratitude towards the IRGC for its performance.‎

IRGC General Mohammad Shirazi, the head of the Leader’s Military Office, relayed the ‎congratulatory message of the commander-in-chief of the Iranian Armed Forces to Major ‎General Hossein Salami, the IRGC’s chief commander.‎

‎“Convey my regards to the IRGC personnel and their respectable families on the occasion of ‎its founding anniversary,” the message noted. “I extend gratitude to them for their good ‎performance and efforts. My prayers are with them.”‎