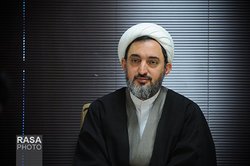 Hujjat al-Islam Haj-Abolqasem-Dolabi stated that negotiating with Iran’s enemies has no ‎purpose other than damaging the country and added, “Relying on domestic capacities and ‎capabilities was the way to overcome the sanctions.”‎

RNA – In an exclusive interview with‏ ‏Rasa News Agency, Hujjat al-Islam Mohammad Haj-‎Abolqasem-Dolabi, the representative of the people of Zanjan in the Assembly of Experts of ‎the Leadership, stated that the Supreme Leader of the Islamic Revolution [Ayatollah ‎Khamenei] considered the criterion for holding Muharram mourning to be the opinion of the ‎National Headquarters of the Fight Against the Coronavirus and stated, “The experts in this ‎headquarters must consider a few points to judge on the methods of mourning. One of ‎these points is the importance of the issue of mourning and its impact on the beliefs and ‎spirits of the honourable people of Iran.”‎

The Iranian cleric and politician pointed to the role of mourning and love of Imam al-Husayn ‎in the Iranian lifestyle and said, “The people of Iran are a people who adhere to wilayah ‎‎(guardianship) and are accustomed to the love and affection of the Master of the Martyrs ‎‎[Imam al-Husayn] and the mourning for that Imam has the greatest impact on promoting ‎the faithful lifestyle and Islamic and revolutionary ethics of the Iranian people.”‎

He stated, “The weakening of mourning can be effective in reducing moral values in society ‎and therefore, first of all, the importance of this issue must be taken into consideration.”‎

Hujjat al-Islam Haj-Abolqasem-Dolabi stressed the need for the National Headquarters of the ‎Fight Against the Coronavirus to decide on holding Muharram mourning ceremonies and ‎added, “In order to maintain health and hygiene in society and in order to prevent the ‎increase in the number of patients with this disease and the creation of a disaster, measures ‎must be taken by the National Headquarters of the Fight Against the Coronavirus.”‎

While emphasizing the observance of health instructions in Muharram mourning‏ ‏commemorations, the teacher in the Islamic Seminary of Qom said, “The National ‎Headquarters of the Fight Against the Coronavirus can achieve a suitable model with ‎measures that can be adopted during the Husayni mourning rites, including social distancing ‎and observance of health protocols, and the people can benefit from the mourning for the ‎Master of the Martyrs and prevent the irreparable damage of the Coronavirus.”‎

Referring to another part of the Supreme Leader of the Islamic Revolution’s orders to rely on ‎internal power as a way to overcome the sanctions, he said, “Those who are self-defeating ‎and have lost their self-confidence and neglect their internal capacities and sometimes ‎deliberately ignore these capacities, look abroad and want economic problems to be ‎resolved through negotiations.”‎

Hujjat al-Islam Haj-Abolqasem-Dolabi pointed out that the talks had resulted in nothing but ‎damage to the country and added, “Over the years, in foreign dealings, especially on the ‎issue of nuclear energy, the pro-Western current has twice insisted on negotiating ‎agreements with the West and halted part of the nuclear industry, in regard to which the ‎foreign side didn’t fulfill its obligations both times and these negotiations resulted in nothing ‎but damage to the country.”‎
‎
Rasa News Agency

Mismanagement In The US Has Multiplied Their Casualties From Corona

Representative of Zanjan in the Assembly of Experts‎:‎