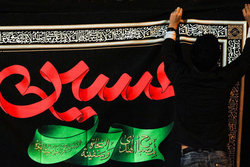 A group of foreign nationals located in Tehran, along with Iranians who used to live ‎abroad or even pay occasional visits to Iran, have gathered together to commemorate ‎martyrdom of Imam al-Husayn on the Day of Ashura.‎

RNA – A group of foreign nationals located in Tehran, along with Iranians who used to live ‎abroad or even pay occasional visits to Iran, have gathered together to commemorate ‎martyrdom of Imam al-Husayn on the Day of Ashura.‎

Commemoration ceremonies for Imam al-Husayn can be found all over the Islamic Republic ‎of Iran during this Islamic month of Muharram. However, a gathering in Tehran reflects to ‎the extent that not only did the message of Imam al-Husayn, the message of truth, not die ‎on the plains of Karbala, it is very much alive.‎

Mourners who originate from many different countries, such as the United States, South ‎Africa, Australia and so many other places prove that by Imam al-Husayn laying down his ‎life in Karbala, almost 1400 years ago, he kept the message of God alive and spread the ‎truth to the four corners of the earth. ‎

These foreigners, who have either temporarily or permanently relocated to Iran, have the ‎opportunity to mourn and commemorate Imam al-Husayn in their native English language. ‎This group offers a unique opportunity to its members to have these religious gatherings in ‎English, where they can make a closer connection to the tragedy of Karbala and the legacy ‎left behind.‎

‎“Every day is Ashura and everywhere is Karbala” is being reflected upon in these gatherings ‎of eastern and western Muslims who say they are ready to answer the call of Imam al-‎Husayn, “Is there anyone to help me?”‎

Those in Tehran who are interested in participating in the gathering can attend it at Eyvan-e ‎Shams Hall located at the beginning of Kordestan Expressway, between Golha Square and ‎Chamran Expressway, every night at Maghrib, beginning with prayers. It will last until the ‎‎11th of Muharram. The programs are opened to the public, preferably those who ‎understand English.‎