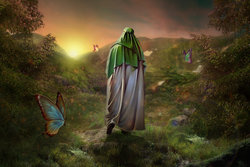 Mahdism and the Islamic Lifestyle

Behavioural Change, the First Action of the Holy Prophet in Creating the Islamic ‎Civilization

It seems that the formation of an Islamic civilization in Islamic culture has not been in such a ‎way that the Prophet Muhammad gathered different cultural classes and held a separate ‎meeting for each group and presented specific advice appropriate to their job. Say, for ‎example, that artists came to talk to him on Mondays or that craftsmen come on Tuesdays ‎etc. Of course, the existence of secret companions and the presentation of valuable rulings ‎for a special group had another reason in the eyes of religious leaders and that is that this ‎category of rhetoric was not suitable for the masses and should have been told to certain ‎people so that today, mysticism would have been a special solution for a special group and ‎not something public. However, in other areas of life, the method of the Prophet of Islam ‎was such that he first tried to rely on Islamic teachings and principles in order to create ‎change in the anthropology, epistemology, ontology and values of Muslims and the first ‎thing that the Prophet did to shape Islamic civilization was to try to change the thought, ‎behaviour and feelings of the Muslims, so that with this development, Islamic culture without ‎the personal supervision of the Prophet, would move toward a special form and style that ‎led to the formation of a special culture that is sometimes interpreted as Islamic civilization.‎

In fact, Islamic teachings led to the orientation that Muslims, or in the words of religious ‎scholars, mutasharra’ah (legislators), chose a particular art, formed a certain architecture, in ‎relationships and economics, they moved toward certain behaviours, sales, and trade and in ‎all elements of culture, they found a special orientation, which is reflected in the comparison ‎of Islamic civilization with Christian civilization or secular civilization. ‎

For example, Muslims have a special orientation in purity and impurity, halal and haram ‎foods, and right and wrong commerce, in other words, in transactions and economics, and ‎the Islamic market is different from the non-Islamic market, and Muslims never turned to ‎visual arts, iconography and nudity in art, but to the decorative arts because it was ‎compatible with their religious principles. In the visual, theatrical, literary and musical arts, ‎they became more inclined towards literary art and accepted other arts to the extent that ‎they were not incompatible with the standards of shari’ah. For this reason, even some of the ‎visual arts, such as painting, were formed under literary art or book design.‎

In fact, by refining pre-Islamic ideas and adorning themselves with Islamic teachings, ‎Muslims could rely on religious interests, Islamic foundations, and prophetic ideas to present ‎Islamic art without the presence of the Prophet at the time of their formation. As is the case ‎in many jurisprudential issues, the jurists, relying on the generalities and sayings of religious ‎leaders, have sought to shape Islamic culture throughout history. In fact, neither the life of ‎the Prophet, nor the extent of human and civilizational issues of the time of the Prophet, ‎made it possible for the Prophet to comment directly on these issues such that the Prophet ‎paved the way for religious intellectuals and the masses to express their views in different ‎areas, relying on generalities and religious principles. Therefore, religious scholars throughout ‎Islamic history, especially in Shi’ah culture, which believes in the category of ijtihad and the ‎extraction of religious views in various fields, were able to explain the Islamic perspective.‎

Lifestyle, the Product of Practice of Religious Duties

Lifestyle is not equal to the concept of religious etiquette but the lifestyle in Muslim societies ‎is achieved through the practice of religious etiquette, ethics and religious beliefs, and as a ‎result, the practice of religious teachings is achieved. In fact, in the religious lifestyle, we ‎want to know that different individuals and social classes in a Muslim society, including ‎workers, engineers, doctors and other classes of Muslim in different situations such as work, ‎leisure, clothing, food, relationships and social and family relationships and the like, how they ‎work. It is obvious that the Muslim way of life is formed by paying attention to religion. ‎Today, if the lifestyle is discussed and sometimes it is seen that the border between our ‎lifestyle and the Western lifestyle is not clear, it is because the religious tradition is not ‎practiced well and when the focus of life is not based on religion and religious practices, ‎certainly, lifestyle will not take on a religious form.‎

For example, acts of worship such as the five daily prayers determine the state of human ‎behaviour in daily situations, or fasting and Hajj in two months of the year, direct part of ‎their actions and behaviour, or religious rituals such as Muharram, the days of martyrdom ‎and birth anniversaries and religious occasions determine a part of the behavioural pattern of ‎Shi’ahs and affect their lifestyle. For example, in the Islamic lifestyle, marriage ceremonies do ‎not take place on the martyrdom anniversaries but celebrations and marriages take place on ‎the birth anniversaries of religious leaders and Muslims direct their behaviour on these ‎occasions.‎

Intellectuals and the Duty of Explaining Life Models

One of the duties of religious intellectuals and intellectuals in the religious community, ‎especially in the new age, is to design and theoretically explain life models, in the sense that ‎it should be about how to raise children and adolescents, urban planning and architecture, ‎family, social and organizational relations, personal and collective characteristics and in other ‎areas of life and set the right models of life for society, which are based on Islamic teachings ‎and teachings.‎

Islamic Iran and an Exceptional Opportunity to Implement a Religious Lifestyle

On the other hand, in addition to theoretical plans by intellectuals and religious scholars, we ‎need institutions and organizations to be responsible to implement plans and theoretical ‎patterns of life and this part of the activities can only be fully implemented in communities ‎that have a religious government and the rulers have special religious concerns. Such that in ‎today’s societies where many rulers of Islamic countries are secular and whether in opinion ‎or in practice, the field of religion and ethics is separated from the field of politics and ‎government. Naturally, a country like Iran, which thinks against this thinking, has an ‎exceptional and unique opportunity, because perhaps there are few countries like Iran where ‎the rulers and those who are in the field of implementing theories have a close relationship ‎with intellectuals and reach out to them to design theoretical models. ‎

Therefore, it can be said that Iran has a good opportunity and conditions to be able to ‎educate generations of people who can continue their lives in the future with a religious ‎model and lifestyle. Just as it is seen today in some developed countries where children are ‎born in environments that are prepared for them and a certain way of life is determined for ‎them and many subconsciously adapt their tendencies, interests, norms, and values to the ‎patterns that others have set for them. In the Shi’ah community of Iran, one can expect ‎intellectuals to plan the Shi’ah lifestyle in different areas of culture, so that after twenty ‎years, it can be imagined that the children of this society and the next generation, which will ‎make up half of the population two decades later will be trained according to that model.‎

Mahdism, the Explainer of Shi’ah Thought

Today, in the era of the occultation of Imam al-Mahdi, one should look for a model of Shi’ah ‎lifestyle that is based on believing in the issue of waiting and the return of the Imam. In the ‎age of occultation, Shi’ism is tied to one of the most serious concepts of the long life of the ‎history of Imamate, namely Mahdism and occultation, and the two concepts of Mahdism ‎and occultation are closely related to the third concept, expectation, so that these three ‎concepts of Shi’ah thought and life are explained.‎‏ ‏Belief in the legitimacy and legitimacy of ‎Imam al-Mahdi and waiting for the formation of a monotheistic society based on his rule are ‎the only factors to legitimize all intellectual and social currents in the age of occultation and ‎this is the first Shi’ah intellectual basis in presenting the Shi’ah lifestyle. Therefore, by ‎extracting the main elements of the idea of Mahdism and cultivating patterns based on this ‎thought, it is possible to determine the way of life of the Shi’ah and raise a generation whose ‎belief in Imamate and Mahdism is one of the basic components of his thought, not only in ‎rituals and relationships, but rather, in his goals and ideals, he pays attention to the infallible ‎Imam and turns his life direction towards a perfect human being.‎