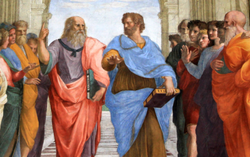 In this article, we will discuss the effects of modernity and the Western lifestyle on Islamic ‎societies. ‎

RNA – Modernism is a philosophical and historical discourse that can be traced back to the ‎Renaissance, a fervent period of European cultural, artistic, political and economic “rebirth” ‎following the Middle Ages. Generally described as taking place from the 14th century to the ‎‎17th century, the Renaissance promoted the rediscovery of classical philosophy, literature ‎and art. This historical discourse has revolutionized all areas of Western human thought and ‎life, and continues to this day, both in the geography of Western countries and in the ‎Eastern world. The core and significance of this concept can be witnessed in the intertwined ‎concepts of the subjectivism of human thought, humanism, secularization, the desecration ‎of materialism, extreme technicalism, fear of the unknown, their stance against shari’ah, their ‎stance against revelation and aversion to texts.‎

All of this has led to a shift in the lifestyle of humankind in the age of modernism and away ‎from their previous lifestyles as well as traditional and religious lifestyles. Here it is ‎appropriate to express what we mean by the word “tradition”:‎

In its simplest definition, tradition is interpreted as belonging to the past. When a culture ‎becomes historical and becomes the theme and foundation of a civilization, the ‎historicization of that culture and that civilization gives rise to tradition. Tradition must be ‎considered a macro-historical culture that gives identity to man and his time. From our point ‎of view, the Islamic tradition is watered by the fountain of revelation, the Quran and Nahj al-‎Balaghah (The Peak of Eloquence) and ahadith (narrations), and it is a sacred and heavenly ‎issue that has clear and transparent borders with superstition and fundamentalism.‎

Due to the rule of the culture of the Imams, a large part of our history, as well as our ‎current culture, is influenced by religion and emerged from religion, and religion has led to the ‎formation and emergence of a special tradition in Iranian society. The obvious weakness of ‎many studies and analyzes of lifestyle is the neglect of the place of Islam and the Shi’ah ‎school of thought in the tradition, history and identity of Iranian society. It seems that for ‎this reason, in the manifesto and charter presented by the Supreme Leader of the Islanic Revolution [Ayatollah Khamenei], all the ‎components of lifestyle, including: identity (self-understanding, understanding of society, ‎understanding of history, etc.), values (both ideal traits and ideal human beings), urban and ‎home architecture, education system, language and literature, art, family (system and role), ‎social relations, social structure, individual and social religiosity, individual and family ‎economic system, nutritional system and individual and family medicine, media, technology, ‎how to approach the world and attitudes towards the socio-political system are linked to ‎religious and Islamic issues.‎

Another world, another man

From one perspective, lifestyle during the globalization of consumerism. What we call ‎consumer globalization is one of the most important issues in the social sciences and cultural ‎studies but the prevalence and current lifestyle is not only a matter of debate and research in ‎scientific-cultural centres but rather, it is a great danger to the future of cultures and the ‎weakening of the foundation of humanity and the spread of unrest in everything and ‎everywhere, and even in the current extended way of life. That is to say, when we consider ‎the way of life without its interior and its core, a serious issue of the Islamic Revolution is ‎easily ignored, which with some simple instructions can prevent the spread of Western and ‎worldly lifestyles. This global style and method of consumerism, and this nauseating pseudo-‎modernity, hedonistic scientism, excessive despair‏ ‏of life, postmodern mindset and warlike ‎absurdity are not compatible with any moral, religious, or intellectual criteria, but if we say ‎very well, we will accept it and alongside that, we set a different style and method, we have ‎had wrong ideas.‎

This thought is no less dangerous than the current method of consumerism and is perhaps ‎more dangerous because we may think that the problem has been solved with some minor ‎changes in the person’s lifestyle and the danger of the domination of the greed of ‎consumerism no longer exists. The problem is that those who believe in the combination of ‎the Western and Islamic lifestyles do not know what they mean by lifestyle and this lifestyle ‎is one of the tools of modernity and the manifestation of the new world, but rather it is the ‎same.‎

Anti-luxury and simple living, which has a high and privileged place in the religious world, in ‎Islamic ethics and the culture of Nahj al-Balaghah, is not practiced in a city where the laws of ‎mechanics, technology and electronics govern all its affairs. In this situation, it can be said ‎that what is the use of wearing simple clothes and eating simple food, but inevitably and ‎necessarily consuming the latest technological achievements?! When we talk about biological ‎simplicity, we need to think about why simple biology is forgotten and what its barriers are ‎and how we can get back to it without the essential reminder if any praiseworthy behaviour ‎is exaggerated, it may lead to big mistakes, just as post-war development and construction ‎led to the denial of the jihadi, revolutionary, and simple biological values for all.‎

People’s habits and lifestyles are important and today, Western thinkers also do not defend ‎the Western way of life and the adornment of human virtues and pious life as a condition of ‎perfection and form for everyone. Thus, one of our problems is not the comparison and ‎choice between the two forms and lifestyles, but the possibility of their realization. To ‎answer the questions of the Supreme Leader of the Islamic Revolution, it is necessary to pay serious attention to the hypothesis that the Western way ‎of life has emerged under the protection of the power of technique and has spread all over ‎the earth. The rule of these powers requires a special way of life, and it seems very unlikely ‎that the moral and religious meaning of virtue and piety can survive under its protection. We ‎are not going to be anti-technical here, we are talking about the impact of the definite ‎necessities of a technologically effected life on lifestyle. The wisdom of the words of this ‎pious sage is revealed here, that he also predicted the means of realizing the Islamic way of ‎life.‎

If the way of life is external and every internal sense has an external sense, then the obvious ‎value is that the way of piety and morality cannot be the dominant and external way of the ‎modern and anti-God world. Of course, it must be known that first of all, the customs and ‎habits of others are not always necessary and some of the social traits of Westerners such ‎as risk-taking and danger, collective work in research and scientific activities, observance of ‎some social rules are respectable. Secondly, the world cannot be transformed by changing ‎the appearance of customs and habits. Before the teaching of the shari’ah, the prophets ‎also refined the souls of the people and prepared them to accept the commands and many ‎of the objections were not of a rational origin but a carnal origin.‎

For the present world and its way of life to change, one must think of another world and ‎another person and a different worldview. That is, another human world must appear on the ‎horizon of understanding. It is in this context that the way of life of the people may change ‎gradually, unpretentiously and effortlessly. In the world that is now in place, the conditions ‎for piety are not available, and those who have all those conditions in them, if they are, are ‎very few. Therefore, in addition to worrying about how people eat and sleep, we need to ‎worry about thought and culture in this world. In this case, one can adopt a new way of life ‎in which pleasure comes before displeasure, truth before falsehood, trust before suspicion, ‎love and knowledge before vindictiveness, the observation of justice before aggression and ‎ignorance, empathy and before over consolidation and the performance duties over the ‎resolution of obligations.‎