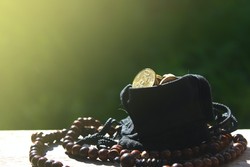 It is understood from verse 12 of Surah al-Isra that, God Almighty, to increase human ‎production and sustenance, advises mankind to give thanks for the blessings that he is ‎given and to use them properly. On the other hand, great emphasis is placed on proper ‎planning, discipline, lawfulness and preparation of the grounds for obtaining sustenance ‎in this verse.‎

RNA – Many verses of the Holy Quran deal with political and economic issues, such as ‎the economy and livelihood of the people and the social and political effects of the ‎attention or disregard for it by governments, the economic lifestyle of government and ‎administrational officials, the observance of shari’ (legal) principles in transactions, ‎assisting the poor, the importance of justice and the proper way of governance.‎

Also, referring to issues such as khums (one-fifth tax), qardh al-hasan (“benevolent lending” – a form ‎of interest-free loan), zakat, usury, halal (lawful) sustenance, the importance of work, ‎effort and production and other issues indicates the importance of these categories ‎from the perspective of God Almighty. ‎

In this regard, we intend to examine the political and economic verses of the Holy ‎Quran and their related exegeses during the holy month of Ramadhan. ‎

For example, in this regard, in verse 12 of Surah al-Isra [The Night Journey], God says:‎

The necessities of sustenance and livelihood in the Holy Quran

In their exegeses, various exegetes have pointed to the economic dimensions of this ‎verse and have considered God’s emphasis on providing the preconditions for ‎mankind’s work and efforts on earth to achieve economic peace. Among other things, ‎the late Allamah Sayyid Muhammad Husayn Tabatabai [d. 1981] has mentioned this ‎verse in his exegesis “Tafsir al-Mizan”:‎

God says: “We made the night and the day two signs. Then We faded out the ‎sign of the night, and made the sign of the day lightsome…”:‎
We created the day and the night and the light and the darkness in such a way that ‎they are signs of Our power, and all creations are from the essence of the signs that ‎indicate their Creator and then night and day are darkness and light that follow each ‎other over the earth as it faces the sun upon sunrise and is hidden from it at sunset to ‎seek sustenance and livelihood, which is are a gift from your Lord. ‎

‎“…so that you may seek from your Lord’s bounty and that you may know the ‎number of years and calculation [of time]…”: ‎
Because if day and night were not consecutive and did not differ from each other in ‎terms of light and darkness, mankind would not be able to calculate time because it is ‎in relation to the rotation of the earth on its orbit that causes day and night and its ‎orbit around the sun that causes seasons and years and it is upon this basis that we ‎calculate days, months and years. ‎

‎“…And We have elaborated everything in detail”:
This suggests that things are ‎distinct from one another, and that nothing is leﬅ ambiguous or unexplained in ‎creation.‎

It is very clear that it is obligatory on every Muslim to seek lawful sustenance and God ‎Almighty has provided its grounds and means on earth. On the other hand, the Holy ‎Quran emphasizes that Muslims must be empowered in every way, especially ‎economically and militarily, and it is certain that one of the tools to become stronger is ‎to avoid convenience and indolence and try to increase productive activities in various ‎interpretations, which has been considered by the exegetes of the Holy Quran in ‎various exegeses of this verse.‎

The necessity of planning to gain sustenance:‎

‎3) Although grace and mercy are from God, we must also strive:‎
لِّتَبْتَغُوا فَضْلًا مِّن رَّبِّكُمْ
‎“so that you may seek from your Lord’s bounty” ‎

‎4) Preparing the grounds for obtaining sustenance is one of the conditions of divine ‎lordship:‎
لِّتَبْتَغُوا فَضْلًا مِّن رَّبِّكُمْ
‎“so that you may seek from your Lord’s bounty” ‎

‎6) The strategy of the system of creation is not without an objective, and in this ‎strategy, the main objective is mankind:‎
لِتَبْتَغُوا ... لِتَعْلَمُوا
‎“that you may seek… that you may know”‎

‎7) Night and day are a natural, permanent, universal, easy-to-understand calendar and ‎a means of order and planning:‎
وَلِتَعْلَمُوا عَدَدَ السِّنِينَ وَالْحِسَابَ
‎“and that you may know the number of years and calculation [of time]”‎

According to the above points, we conclude that from the perspective of the Holy ‎Quran, work, effort and attention to productive activity are important elements of ‎increasing human sustenance. Of course, this issue has also been mentioned in many ‎other verses in the Holy Quran. In order to increase human production and sustenance, ‎God Almighty also advises to give thanks for these blessings and use them properly. On ‎the other hand, this verse places great emphasis on proper planning, discipline, ‎lawfulness and the preparation of obtaining sustenance.‎