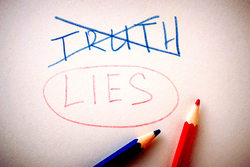 Given that lying is one of the greater sins and is in fact the key to other sins, man should ‎always avoid it.‎

Given that lying is one of the greater sins and is in fact the key to other sins, man should ‎always avoid it.‎

Question:‎ In what cases has Islam considered lying to be expedient and permissible?‎

Response:‎ Given that lying is one of the greater sins and in fact is the key to other sins, man should ‎always avoid it but sometimes this greater sin is allowed and sometimes becomes ‎obligatory. Therefore, it is obligatory for us to know the conditions in which lying is ‎permissible or obligatory. ‎

We bring some of these cases which are mentioned in the books of fiqh al-istidlali ‎‎(demonstrative jurisprudence):‎

There are several reasons for permitting lying in cases of necessity and urgency, one of ‎these reasons is the holy verse of the Holy Quran, “Excepting someone who is compelled ‎‎[to recant his faith] while his heart is at rest in it, those who disbelieve in God after ‎‎[affirming] their faith and open up their breasts to unfaith, God’s wrath shall be upon them ‎and there is a great punishment for them.” [1]‎

With faith – yes, those who open their hearts to accept disbelief, the wrath of God is upon ‎them and a great punishment awaits them!‎

This blessed verse indicates that expressing disbelief is not forbidden out of compulsion and ‎reluctance, but out of necessity and saving one’s life.‎
‎ ‎
In another verse, God says: “The faithful should not take the faithless for allies instead of ‎the faithful, and God will have nothing to do with those who do that, except when you are ‎wary of them, out of caution. God warns you to beware of [disobeying] Him, and toward ‎God is the return.” [2] According to this verse of the Quran, if a person clearly sees that if he ‎does not express friendship with the disbelievers, his life and rubbing will be in danger, then ‎here, expressing love to them is permitted. That is, in principle, expressing love and ‎guardianship for the disbelievers is forbidden and can even cause them to leave the religion ‎but it is not forbidden in the position of necessity and the protection of life.‎

The narrations also convey this theme: “Nothing is forbidden unless God Almighty has made ‎it lawful for the distressed person.” [3] ‎

‎2. Reform among the believing brothers: One of the places where lying is permissible is ‎the will to bring about reform between two people, and through this, if two people or two ‎tribes or clans have ambiguity and enmity with each other and someone comes to make ‎peace between them, and lies with this intention, he has not done anything forbidden. There ‎is a lot of information in this regard. [4] In a narration from the Holy Prophet of Islam ‎‎(Muhammad), it is stated: “Oh Ali! God loves a lie that is made on the path of reform among ‎the people and hates the lie that causes corruption.” [5] And in another narration from ‎Imam Ja’far al-Sadiq, it is stated: “A reformer is not considered a liar.” [6] Imam Khomeyni ‎has relied on these two narrations to allow lying in cases of reforming.‎ [7]

Summary and conclusion: In general, in any case where a lie is told and its purpose is to ‎ward off evil and harm from a Muslim or the goal is to reform among the people, not only is ‎lying not forbidden, but it is beautiful and pleasing because this lie is no longer the key to ‎sins, but goodness and kindness to people. Of course, such a lie is also permissible and ‎acceptable when it is not possible to tell the truth, in which case lying becomes permissible ‎or obligatory, and telling the truth is prohibited or forbidden.‎

In conclusion, it should be noted that expedient lying is possible only in the above cases, i.e. ‎cases where leaving it causes restrictions and losses that are impossible to compensate but ‎lying for the purpose of material use or for personal gain and the like is not a part of ‎expedient lying and it is definitely forbidden and subject to the verses and narrations of the ‎sanctity of lying and it will cause humiliation and misery in this material world and the ‎hereafter.‎