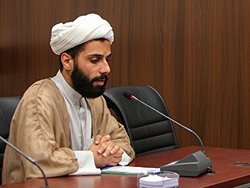 The United States is experiencing unrest following the death of George Floyd, which has its ‎roots in racism and the rule of the American capitalist system.‎

RNA – On May 25, the fire of racism in the United States flared up again and continues to ‎this day. The story began when a Derek Chauvin, a white Minneapolis police officer, arrested ‎an unarmed African-American man named George Floyd in a violent manner after he ‎allegedly used a counterfeit $20 bill at a deli. Pictures released of the incident showed the ‎policeman kneeling on the neck of the 46-year-old’s neck, which prevented him from ‎breathing. This violent act eventually led to Floyd’s death.‎

This racist act by the American police is currently under debate from several angles. Hujjat ‎al-Islam Aref Ebrahimi, a researcher in the Islamic Seminaries of Qom, states:‎

‎1. This is not the first time that the American police have committed such a racist act, and in ‎recent years we have witnessed the murder of Eric Garner [1] and Michael Brown [2] and ‎many others because they were black. Of course, it should be noted that these two issues ‎were raised in the American media, and there are many similar examples of racist incidents ‎that haven’t published in the media.‎

‎2. Floyd’s murder rekindled the fire of racism and led to protests in the United States, with ‎some American cities witnessing street protests since last Monday, despite the widespread ‎outbreak of the Coronavirus and some areas have become war zones and security police ‎and the army have entered the scene.‎

Protesters in the United States, who include many whites, don’t have more than one ‎demand, and that is the administration of justice.‎

‎3. The American government fired the four police officers who committed this racist act ‎against George Floyd to calm the protesters, but the question is whether acquitting or firing ‎the police officers means that they have immunity to take any action against blacks. If such ‎a thing had happened to a white man, would the American government have simply ignored ‎it?‎

Unfortunately, after examining the actions of the American judiciary on such issues, we find ‎that there is no serious punishment for racist police officers, just as the killers of Eric Garnet ‎and Michael Brown were not punished.‎

‎4. According to a report by the British news agency, The Independent, the number of ‎murders of blacks is double that of whites and the report states that from 2015 to 2019, ‎more than 1,000 people lost their lives from being shot and beaten by the police.‎

‎5. US President Donald Trump has repeatedly beaten the drum of racism since taking office ‎and even during the election campaign, as exemplified by his remarks on January 11, 2018, ‎during a meeting in the Oval Office with both Democratic and Republican lawmakers in which ‎he referred to immigrants from Haiti, El Salvador and some African countries and said, “Haiti? ‎Why do we want people from Haiti here?... Why do we want all these people from ‘shithole ‎countries’ coming here? We should have more people from places like Norway.”‎

Racism is a long-standing wound in American society that turns into a big fire with the ‎slightest spark every time. Racism and the rule of capitalism are two scissor edges that are ‎separating the heads of the American people. These two results result in nothing but ‎poverty, corruption and discrimination for the people. This pain peaks when some in the ‎countries of the region, or the so-called Third World, place all their hopes and aspirations in ‎the United States and Western countries and aren’t willing to see and understand this filthy ‎tumour that has grown up in these countries.‎

‎[1] On July 17, 2014, Eric Garner died in the New York City borough of Staten Island after ‎Daniel Pantaleo, a New York City Police Department (NYPD) officer, put him in a chokehold ‎while arresting him. NYPD officers approached Garner on July 17 on suspicion of selling ‎‎“loosies,” single cigarettes from packs without tax stamps. After Garner told the police that ‎he was tired of being harassed and that he was not selling cigarettes, the officers attempted ‎to arrest Garner. When Pantaleo placed his hands on Garner, Garner refused to cooperate ‎and pulled his arms away. Pantaleo then placed his arm around Garner’s neck and wrestled ‎him to the ground. With multiple officers restraining him, Garner repeated the words “I can’t ‎breathe” 11 times while lying face down on the sidewalk. After Garner lost consciousness, ‎officers turned him onto his side to ease his breathing. Garner remained lying on the sidewalk ‎for seven minutes while the officers waited for an ambulance to arrive. Garner was ‎pronounced dead at an area hospital approximately one hour later.‎

‎[2] Michael Brown died on August 9, 2014, in Ferguson, Missouri. Brown, 18, died after being ‎shot at least six times by Darren Wilson, a 28-year-old Ferguson police officer. Brown wasn’t ‎armed and had no criminal record. According to the Ferguson City Police Department, Brown ‎was suspected of involvement in a robbery that took place minutes before the shooting. ‎Despite the allegations, Wilson’s initial contact with Brown had nothing to do with the ‎robbery, but police released a video of the robbery. The city’s police department has ‎changed its account several times. Wilson served four years in the Ferguson City Police ‎Department and two years in the Police Department. US Department of Justice officials say ‎no charges have been filed against the former white police officer in Ferguson, Missouri in ‎connection with the murder of Michael Brown.‎

US Launching Biological War against Iran