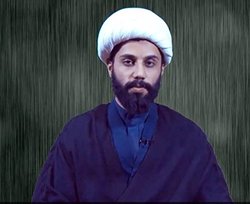 Hujjat al-Islam Aref Ebrahimi said, “The United States is one of the main culprits in the spread of the Coronavirus in the world, thereby bringing Iran and China to their knees.”

RNA – Severe Acute Respiratory Syndrome Coronavirus 2 (SARS-CoV-2) is the name of a virus that is challenging the world at the present time and the situation is such that people have to stay home out of fear of being infected and all activities outside the house must be suspended.

The outbreak of the virus has dealt a strong blow to the economic, cultural and political sectors, with some raising the possibility of a biological attack and accusing the United States of being responsible for it.

On this basis, Hujjat al-Islam Aref Ebrahimi, a researcher in the Islamic Seminaries of Qom explored this issue in an exclusive article for Rasa News Agency.

“Biology” is the natural science and knowledge of exploring organisms. This knowledge examines the characteristics and behaviour of organisms, how species and individuals emerge (reductionism), as well as the interactions of organisms with each other and the environment around them. Biological warfare means the use of biological agents, including bacteria, viruses, fungi and their products for hostile purposes to kill or disable humans, animals, or plants.

Various countries are secretly and publicly using this type of war to advance their goals, such as their public use by Germany in World War I and their covert use by the United States, the Zionist regime and the Saudi regime.

Investigating the likelihood of an American biological attack

On March 12, 2020, Ayatollah Sayyed Ali Khamenei, the Commander-in-Chief of the Iranian Armed Forces, issued a decree to Major General Mohammad Baqeri, the Chief of Staff for the Armed Forces, calling for the establishment of a health centre for the control of the Coronavirus, saying, “This action could also have a biological defence combat aspect and add to national authority and power, given the evidence that the context may have been a ‘biological attack.’”

He said, “The virus may be the product of an American biological attack that first spread to China and then to Iran and the rest of the world. The United States knows that if it did perpetrate this act, it will come back to its people, and if it wasn’t the United States, the virus will be taken under control.”

Brigadier General Gholamreza Jalali, the head of the Passive Defence Organization, also confirmed the Coronavirus’s biological implications, referred to the United States’ biological laboratories around Iran, China and Russia. “The virus has many of the characteristics of biological warfare but it can be further investigated by virologists to determine whether it’s biological warfare."

Other officials, such as Hoseyn Amir-Abdollahian, a special aide to the President of the Islamic Parliament of Iran in International Affairs, Sayyed Amir-Hoseyn Ghazizadeh-Hashemi, a member
board of directors of the Islamic Consultative Assembly, and Brigadier General Abdollah Eraqi, the deputy commander of the IRGC Ground Forces, and a spokesman for the camp for Combating the Coronavirus at the headquarters of the armed forces, have confirmed the possibility of it being a biological attack.

Other countries, such as China and Russia, have also raised the possibility of a biological attack by the United States, including Zhao Lijian, the deputy director of China’s Foreign Ministry Information Department.

On March 12, 2020, Zhao wrote on his Twitter account (@zlj517), “It might be US army who brought the epidemic to Wuhan. Be transparent! Make public your data! US owes us an explanation!”

Scientific and authoritative articles have also been published in recent years that attribute this devious virus to the United States. An article published on the site nature.com on November 9, 2015 states that in a joint experiment with the Wuhan Institute of Virology, University of North Carolina at Chapel Hill and the Department of Cancer Immunology and AIDS at Dana-Farber Cancer Institute, Harvard Medical School recorded a test that combined the Coronavirus in bats and mice to infect kill human cells. Now we need to see how the United States responds to these Coronation allegations.