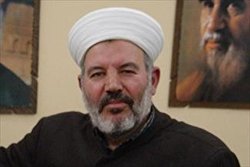 Shaykh Qasim described Iran’s plan to end the Palestinian conflict as logical and reasonable ‎and said, “Finally, the al-Aqsa Mosque will be liberated by Muslims.”‎

RNA – In an exclusive interview with Rasa News Agency, Shaykh Sa’id Khalid Qasim, the ‎chairman of the Islamic Council of Palestine, referred to the Deal of the Century and said, ‎‎“Just as it’s stated in the verses of the Quran, the al-Aqsa Mosque will eventually return to ‎Muslims and the final promise to enter the al-Aqsa Mosque will come to an end after the ‎clashes.”‎

The Palestine Sunni scholar said, “The Deal of the Century is a weak initiative and these ‎initiatives are often carried out by the Arabs or their allies and this fight will end with victory ‎over the Zionist enemies in Palestine and these initiatives aren’t able to control the ‎international and regional decision.”‎

Shaykh Qasim said, “Some Arab countries are surrendering in the face of the Palestinian ‎issue and not only do they not play a positive role, but rather, with a negative role and ‎negligence and conspiracy, try to create a Jewish state. Those who control the decisions of ‎the Arab League, are countries that played a role in the establishment of Israel and the ‎expulsion of the Palestinians from their land and they still participate in all the wars against ‎the Arabs and Muslims by supporting the Zionist regime. Therefore, this deal has no positive ‎effect.”‎

He added, “Some Arab countries secretly agree with Trump’s plan and ostensibly oppose it ‎but other parts of the Arab world, such as Syria and the Islamic Resistance Axis, which don’t ‎have much power in the Arab community right now, or Algeria, Tunisia and Iraq, which aren’t ‎able to have much influence on the conflict with the Zionist regime, openly oppose it.”‎

‎“The Deal of the Century seeks to eliminate the issue of Palestine, occupy more land and ‎expel its inhabitants to neighbouring countries and achieve a greater Israel,” he said.‎

Shaykh Qasim stated, “The Deal of the Century can’t solve the existing problems and protect ‎the people of this country according to what the Prophet of Islam promised us. The ‎believers are preserving this land and it’s now occupied due to the weakness of the ‎Muslims.”‎

He said, “Trump’s plan to completely occupy Palestine and expel the people to neighbouring ‎countries and the realization of the state of Israel and the plan of Iran is logical, reasonable ‎and acceptable‏ ‏but there is a difficult way to achieve it. The United States has many ‎problems due to the Coronavirus crisis and the assassination of George Floyd and the ‎protests and is on the verge of collapse.”‎

Shaykh Qasim said, “Some Arabs have been conspiring on this issue for a long time since ‎the Balfour Declaration was issued in 1917 and some of them have subordinated their ‎position to the ruler and the king and the result is the continuation of the conflict and ‎conspiracy over the issue of Palestine. As long as Imam Khamenei and Hujjat al-Islam ‎Sayyid Hasan Nasrallah support the Islamic Resistance Axis, Palestine will be liberated and ‎the Deal of the Century will fail.”‎