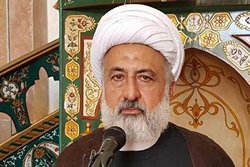 Hujjat al-Islam al-Khatib stated, “The Zionist regime is the source of sedition and ‎turmoil in Syria, Lebanon and Palestine.”‎

RNA – In a meeting with Mohammad Fahmi, Lebanon’s Minister of Interior and ‎Municipalities, Hujjat al-Islam Ali al-Khatib, the deputy speaker of the Lebanese Shi’ah ‎Islamic Assembly, stressed that political stability is a national need and an urgent need ‎and added, “Achieving stability brings security, and therefore politicians are obliged to ‎cooperate with the government in their efforts to resolve the accumulated crises, which ‎have exhausted the citizens and not hinder the reform process and the achievement of ‎security and social and economic stability.” ‎

Hujjat al-Islam al-Khatib stressed, “The Zionist regime is the source of turmoil and ‎insecurity in the region and the ignitor of seditions and is responsible for crises in ‎Lebanon, Syria and Palestine.”‎

Lebanon is facing its worst economic crisis in decades. The Lebanese pound has ‎continued to plummet against the US dollar, losing more than 80 percent of its value ‎over the last weeks while sources of foreign currency have dried up.‎

The economic situation is fueling inflation, which the Finance Ministry has estimated will ‎reach 27 percent later this year.‎