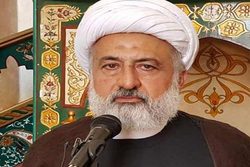 The vice-president of the Lebanese Supreme Islamic Shia Council maintained that the cruel sanctions of the US and its allies against Iran are doomed to failure.

RNA - The vice-president of the Lebanese Supreme Islamic Shia Council, Sheikh Ali Khatib, delivering the sermons of this week’s Friday prayer, performed in Labaya Mosque in the Western al-Biqa region, expressed concerns over the troubles and tensions of the region and stated that Lebanon should keep away from such tensions and troubles.

He added, “Sanctions and pressures of the US and its allies against the Islamic Republic of Iran, Syria and the Resistance Front are a new colonizing attempt being made softly. We should confront them through patience, wisdom, vigilance and employing our power and unity.”

Describing the cruel sanctions and pressures against Iran as doomed to failure, he maintained, “Iran never stops backing the Resistance Front and Palestinian people, the government whose slogan is putting up resistance against colonism, never goes through crises; and we will soon conquer the forces of wickedness and cruelty employing wisdom, bravery, leadership, combatants, patience and vigilance.”