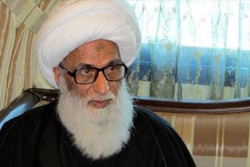 Ayatollah Najafi said, "We welcome the unity and solidarity of the Iraqi military forces and hope these laws are executed as soon as possible."

According to the correspondent of Rasa News Agency in the holy city of Najaf, Ayatollah Sheikh Bashir Najafi, a source of emulation, based in Najaf, issued a message about the recent decisions of the government on linking the Iraqi Popular Mobilization Forces (Hashd al-Shabi) to the army.

We welcome the unity and solidarity of the Iraqi military forces and hope these laws are executed as soon as possible. They bring about unity among the Iraqi national forces and prevent any dispute.

This decision is taken and will come into effect in the honour of the Iraqi heroes who made [and will make] sacrifices in the defence of the sacred sites and issues and the motherland. The Iraqi officials should guarantee the rights of the volunteer forces and esteem them.