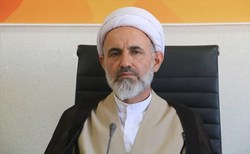 The member of Assembly of Experts, saying that the sanction imposed against the supreme leader showed that his strong positions act as a thorn in the side of the enemies, stated, “Imposition of sanction against him will have no negative impact on the world of Islam.”

RNA - Hujjat al-Islam Askar Dirbaz, the representative of Western Azerbaijan to the Assembly of Experts, talking to Rasa NA, condemned the sanction of supreme leader imposed by the US and said, “The cause of their sanction is certainly their inability and failure.”

He added, “Imposing sanction against a brilliant figure of the world of Islam won’t have any negative impact on his position and the world of Islam. This sanction has resolved the doubts of many people about the supreme leader and let them know how superior is his personality.”

Saying that Zionists and Americans attempt to hamper the advances of Muslims, the representative of the Assembly of Experts maintained, “The step taken by the US against the leader of the revolution shows that his strong positions have acted as a thorn in their side.”

He finally stressed, “Imposition of sanction against the supreme leader by the US made his followers more certain about their belief and added to their abomination of the enemies of the world of Islam. This stupid action fosters the unity of the Muslim Ummah and raises the number of his followers and lovers.”