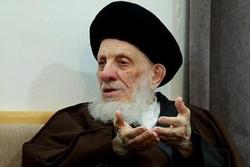 A source of emulation, based in Najaf Ashraf, stressed the need for promotion of the holy religion of Islam in the Pakistani and Indian societies.

According to the correspondent of Rasa News Agency in the holy city of Najaf, a group of lovers of Ahl al-Bayt (AS), coming from Pakistan, met Ayatollah Sayyed Muhammad Saeed Hakim, a source of emulation based in Najaf Ashraf.

During the visit, Ayatollah Hakim, stressing that Pakistani Shiites should follow the example of the ones who attended in Pakistan for the promotion of Islam in the past, maintained, “We are supposed to follow the example of the past in religious, moral and belief issues, as they promoted the heavenly religion and the instructions of the Prophet (S) and the infallible Imams.”

He added, “The followers of Ahl al-Bayt (AS) in Pakistan and India should perform their task of introducing the religious culture and standing against the destructive Western culture.

It should also be noted that the office of Ayatollah Sayyed Muhammad Saeed Hakim in Syria, held a mourning ceremony for Sayyed Muhammad Hussaini Shahroodi, an Iranian scholar.