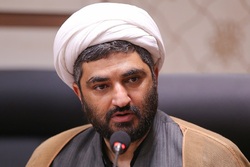 The chairman of Rasa News Agency said, “Ayatollah Arafi, a wise and experienced manager, is a great blessing for the seminary and his experiences develop new productive capacity in seminaries.”

RNA - The chairman of Rasa News Agency, Hujjat al-Islam Muhammad Mehdi Muhaqqeqi, meeting the president of Semnan Province seminaries, Hujjat al-Islam Rostamian, said, “Rasa is an institute distributing cultural products and services with the purpose of deepening the discourse of the Islamic Revolution.”

Pointing to the positive educational and management changes happened in seminaries in the term of Ayatollah Arafi, the chairman of Rasa News Agency said, “Ayatollah Arafi is a great blessing for seminaries, he owns valuable management experiences and a high scientific position”.

Hujjat al-Islam Muhaqqeqi, dealing with the use of the potentials of provincial seminary councils, said, “A new approach has been adopted in Ayatollah Arafi’s term, and this has led to the development of new sub-disciplines and programs. Some new workgroups have also been formed on the new jurisprudential issues and for developing the part of the seminary beyond its traditional roles.”

It should be noted that the chairman of Rasa News Agency, together with some directors and secretaries, had a trip to Semnan and visited the representative of the supreme leader to this province, scholars, and some promotional and cultural managers of this province.