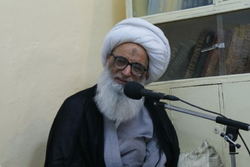 A group of Iranian officials responsible for Arbaein pilgrimage affairs visited Ayatollah Najafi, a source of emulation, based in Najaf.

According to the correspondent of Rasa News Agency in the holy city of Najaf, a group of Iranian officials responsible for Arbaein pilgrimage affairs met and talked to Ayatollah Najafi, a source of emulation, based in Najaf Ashraf.

In the course of the session, Ayatollah Najafi pointed out that Arbaein pilgrimage should be made for deriving the satisfaction of Heaven and the Prophet of Islam (S).

This source of emulation added, “Arbaein pilgrimage had best lead to more frequent recourses to religious teaching and recommendations. The route of Najaf to Karbala is the heavenly path of obedience to God, the Sublime, and the right place for the expression of love towards the prophet of Islam (S) through the devotion to Imam Hussain (AS).”

He finally stressed the ties between Iran and Iraq for the promotion of services to the pilgrims and better organisation of Arbaein march and gathering.

The Iranian officials also presented a report on their programs and activities and emphasized the adoption of the recommendations put forward by the sources of emulation.