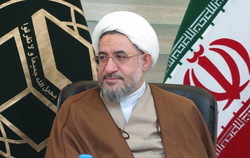 The member of the Assembly of experts, pointing to the links between the culture and government, stated, “The society won’t be created in the absence of political government and leader, and it is the government that develops culture in people.”

RNA - The secretary-general of the World Forum for Proximity of Islamic Schools of Thought , Ayatollah Araki, attending in the ceremony held for the introduction of supreme leader’s music syllabus, held in conference hall of Wali Amr Jurisprudence Centre, saying that music is identity-builder, stated, “The factors contributing to the creation of true Shiite identity should be examined and introduced.”

Saying that our jurisprudence (Fiqh) is identity-builder, he maintained, “The concepts contributing to the establishment of the identity and culture should be extracted, introduced and implemented.”

Finally, he said, “Media is a sub-category of culture, it is used for building culture in the society. It is an effective tool owned by the government. However, media should only be employed for transferring the true identity and proper contents.”