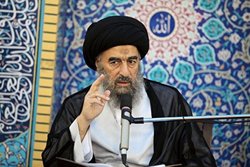 A renowned Iraqi source of emulation called for keeping the doors of mosques and shrines ‎open in accordance with hygiene guidelines and stated, “It’s not acceptable for places of ‎entertainment and commercial centres to be open and the houses of God to remain closed.”‎

RNA – Ayatollah Sayyid Muhammad-Taqi al-Modarresi, a renowned Iraqi source of emulation, ‎issued the following statement on the occasion of the Day of Arafah and Eid al-Adha:‎

We are approaching the Day of Arafah, one of the most important days of the year, as well ‎as Eid al-Adha, which is the day of divine mercy and forgiveness and the answer to ‎supplications. In these blessed and great days, we ask God to ward off tribulation from us. ‎This is a great occasion, and if we do not enjoy its virtue, we will not have such a virtue until ‎the next month of Ramadhan.‎

Believers, brothers and sisters, seize this golden opportunity. Due to the special ‎circumstances of this year and the suspension of Hajj ceremonies, as well as the deprivation ‎of many from making the pilgrimage to [the Holy Shrine of] Aba Abdullah al-Husayn, as well ‎as quarantines and social distancing that have limited the possibility of holding ceremonies in ‎mosques and holy shrines, let us consider our houses as houses of remembrance. ‎

As God Almighty says: “In houses God has allowed to be raised and wherein His Name is ‎celebrated; He is glorified therein, morning and evening, by men whom neither trade nor ‎bargaining distracts from the remembrance of God and the maintenance of prayer and the ‎giving of zakat. They are fearful of a day wherein the hearts and the sights will be ‎transformed” [Quran 24:36-37].‎

Just as the Holy Prophet Muhammad said, “The earth has been made for me a place of ‎prostration and a means of purification‎,” let each of us pray and supplicate for three days at ‎home and with our families and ask God to ward off this tribulation from us and grant us ‎goodness and blessings from His grace.‎

I call on the authorities to keep the doors of mosques and shrines open these days by ‎observing hygienic guidelines because it is not acceptable for places of entertainment and ‎commercial centres to be open and the houses of God to remain closed. As Muslims, we ‎draw all our strength and hope from prayer and intercourse. God Almighty says: “Your Lord ‎has said, ‘Call Me, and I will hear you!’ Indeed those who are disdainful of My worship will ‎enter hell in utter humiliation” [Quran 40:60].‎

Did not God distance the tribulation from the people of Jonah when they repented and ‎returned to Him? And He said: “Why has there not been any town that might believe, so that ‎its belief might benefit it, except the people of Jonah? When they believed, We removed ‎from them the punishment of disgrace in the life of this world, and We provided for them for ‎a while” [10:98].‎

‎“Oh God! Have I not conveyed (the message)? Oh God, I bear witness! And You are the ‎One from whom help is sought and complaints are made and in You we trust in the times of ‎difficulty.”‎