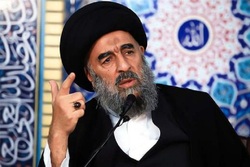 An Iraqi source of emulation called for a look to the future and a comprehensive plan to ‎deal with the economic crisis in Iraq.‎

RNA – In a speech, Ayatollah Sayyed Mohammad-Taqi al-Modarresi, an Iraqi source of ‎emulation, said, “Iraq used to live in prosperity, but due to the Mongol invasion, the ‎pursuit of dictatorships, occupation and successive wars, it fell into a deep sleep and a ‎comprehensive revival to get out of that hibernation and return to life must be called. ‎We should be dignified and proud but before planning, we should hope for the future ‎and look at the light at the end of the dark tunnel.”‎

His Eminence emphasized, “A movement and awakening must be formed by all the ‎children of this homeland, our vision must be for the future and we must build the ‎country by following the Quranic approach, which is summarized in three articles.”‎

He stated, “First, piety to God Almighty means that man includes an integrated system ‎of divine, human, civilized, and national values that are intertwined at the root, ‎although their manifestation is different, such as honesty and loyalty, values of ‎solidarity, and benevolence for others.”‎

Ayatollah al-Modarresi said, “Secondly, the search for a means to reach God Almighty, ‎which is formed through good deeds and service to the people, and the greatest means ‎to reach God are the Prophet and the Ahl al-Bayt, such that everyone follows them and ‎follows their path. He will give the light of his guidance, he will be saved, and his ‎intercession will be with God.”‎

He stressed, “Today’s jihad is facing economic challenges. It’s building and prospering ‎and reviving economic weakness and tackling this all-encompassing disease that has ‎affected our lives and it shows that trust in oil as the main source of our national ‎wealth is not a strong pillar because this country has strong men which prevents the ‎country from relying on oil.”‎

Ayatollah al-Modarresi stated, “Iraq needs an independent fund through which it can ‎maintain oil revenues in the form of gold bars or bonds so that the government can ‎solve its economic problems when needed.”‎

In conclusion, he called for the cooperation of the government and the people in facing ‎these challenges and said, “Iraq’s resources, including oil, must be in the hands of ‎domestic companies so that the proceeds go back to the Iraqi people and this depends ‎on the people starting to set up companies to extract oil to benefit the country.”‎