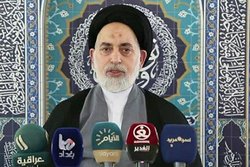 The Friday prayer leader of Najaf expressed his sympathy with the Lebanese people on the ‎occasion of the explosion of the Port of Beirut and stated that the traces of the Zionist ‎regime are evident in this incident. ‎

RNA - In a speech about the Beirut incident, Hujjat al-Islam Sayyid Sadruddin al-Qubanchi, ‎the Friday prayer leader of Najaf, said, “We express our solidarity and sympathy with the ‎Lebanese people and how good it is that the Iraqi people quickly helped the wounded ‎Lebanese people by sending aid by plane.”‎

The Iraqi cleric stated, “The elements involved in this tragedy shouldn’t be hidden. The action ‎came as [Prime Minister of the Zionist regime] Benjamin Netanyahu spoke about the Port of ‎Beirut last year and plans have been made for the crime ever since.”‎

Stating that the Zionist regime is one of the culprits of the Lebanese bombing, he added, ‎‎“The enemies seek to bring the people to their knees with such actions and submit to their ‎demand to implement the draft plan of the Deal of the Century, but thank God this won’t ‎happen and we are patient and steadfast.” ‎

On August 4th, multiple explosions occurred in the Port of Beirut. At least 157 people were ‎killed and 5,000 were injured. The explosion initially killed several port workers and then ‎expanded into half of the city, killing several residents in their homes and people in buildings ‎and streets. The explosions destroyed large parts of the port, including its warehouses and ‎grain elevator.‎

Referring to the early elections in Iraq, Hujjat al-Islam Qubanchi emphasized, “We agree with ‎the elections because we have no other choice and this election is our constitution and we ‎call on the government to take measures and preparations for the participation of the ‎people in determining their own destiny.”‎

In another part of his speech, His Eminence added, “We thank and appreciate the Holy ‎Shrine of Imam al-Husayn for establishing two medical centres in Mosul and this is a sign ‎that the generous hand of Imam al-Husayn has extended so much that he reaches Mosul to ‎help the people of that region. It must be said that Imam al-Husayn’s generosity is not ‎limited to Shi’ahs and it belongs to everyone.”‎

Referring to the sixth anniversary of the genocide of Izadis (Yezidis) in the Sinjar region of ‎northern Iraq, he said, “Daesh falsely committed atrocities in Sinjar in the guise of Islam, ‎such that the people of Sinjar are still migrating and the international community has ‎remained silent in these incidents. We expect the government to rebuild Sinjar and ask the ‎Izadis to return to their homes and the Izadi minority must be fully supported according to ‎Iraqi rights.”‎

Hujjat al-Islam Qubanchi referred to Eid al-Ghadir and said, “Tomorrow, we will celebrate the ‎biggest feast, which is Eid Ghadir, and is called ‘Yawm al-Ahd’ (The Day of the Promise) by ‎the people of heaven and ‘Yawm al-Mithaq’ (The Day of the Covenant) on earth and ‎therefore it’s recommended that a brotherhood be established among the believers on this ‎blessed day.”‎