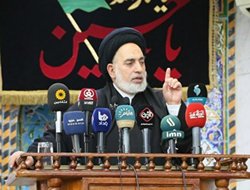 In a statement, The Friday prayer leader of Najaf offered condolences on the martyrdom of a number of mourners who were killed in a stampede in Karbala on the day of Ashura.

According to Rasa News Agency’s correspondent in Najaf, Hujjat al-Islam Sayyid Sadruddin al-Qubanchi, the Friday prayer leader of Najaf, issued a statement in which he offered his condolences on the martyrdom of a number of mourners who were killed in a stampede while performing the Rakdhah al-Tuwayrij [Tuwayrij run] rite in Karbala on the day of Ashura (September 10th).

At least thirty-one pilgrims lost their lives and dozens more sustained injuries in a stampede during the Muslim religious rituals of Ashura in the Iraqi city of Karbala, the Iraqi Health Ministry said.

The Iraqi Shi’ah scholar praised the Iraqi people for their unparalleled revival of the rites in memory of Imam al-Husayn and “The Iraqi people have united to protect the values and foundations of the Husayni movement.”

Hujjat al-Islam al-Qubanchi stated, “We thank and appreciate the Holy Shrines of Imam al-Husayn and Hadhrat Abbas, satellite networks, lecturers, government agencies, security agencies, medical centres, Husayni mawkibs and all those who have taken steps in these days.”

Also, Hujjat al-Islam Sohbatollah Rahmani, the general manager of the Pilgrimage and Hajj Organization of the Holy Shrines, said, “Due to overcrowding among the mourners of Imam al-Husayni, at least 34 people were killed and 122 were injured and taken to medical centres.”

He added, “In order to further clarify the cause of the incident and the death toll, especially in the case of Iranians, a headquarters composed of the Iranian Consulate in Karbala, the Red Crescent, the Hajj Mission of the Supreme Leader in Iraq and the Hajj and Pilgrimage Organization has been established.”

Hujjat al-Islam Rahmani said, “Sources in Iraq’s Ministry of Health also confirmed that the incident was not due to a collapse or displacement at the site but it was due to a large crowd of mourners.”

0
0
Answer
ya husein
Please type in your comments in English.
The comments that contain insults or libel to individuals, ethnicities, or contradictions with the laws of the country and religious teachings will not be disclosed