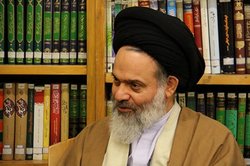 Ayatollah Hoseyni-Bushehri said that the United States doesn’t respect Iraqis and other ‎nations and said, “The Iraqi people can better secure themselves without the presence ‎of the United States.”‎

RNA – In an exclusive interview with Rasa News Agency, Ayatollah Seyyed Hashem ‎Hoseyni-Bushehri, the secretary of the Supreme Council of Islamic Seminaries, referred ‎to Iraqi Prime Minister Mustafa al-Kadhimi’s meeting with the Supreme Leader of the ‎Islamic Revolution [Ayatollah Khamenei] and his statements about the assassination of ‎Martyr Qasem Soleymani and said, “He said that the Americans martyred your guest in ‎your own house and explicitly admitted that. In fact, the Supreme Leader warned the ‎Iraqis with an emotional statement that the United States didn’t respect the Iraqis by ‎assassinating their guests.”‎

The representative of the people of Bushehr province in the Assembly of Experts of the ‎Leadership said that the United States doesn’t respect Iraq and other nations and ‎noted, “The United States claims that it’s present in Iraq to ensure the security of the ‎Iraqi people but what kind of security is it that would martyr a guest of a country on its ‎own soil?”‎

He emphasized that Iran has been and will be with the Iraqi people in difficult and ‎critical conditions and said, “Iraqis are aware that Iran may be one of the few countries, ‎or perhaps the only country, that stands by them in difficult and critical situations, and ‎that the blood of the children of Iran and Iraq is mixed to preserve Iraq’s territorial ‎integrity.”‎

Ayatollah Hoseyni-Bushehri added, “During the conflict against Daesh, it was General ‎Soleymani who stood up to the enemies’ attacks with all his might and thwarted their ‎plans to occupy Iraqi cities and insult the holy shrines. If it wasn’t for the presence of ‎General Soleymani and the ‘obligatory jihad’ fatwa of the supreme religious authority ‎‎[Ayatollah al-Sistani], Iraq would be in a very bad situation now.”‎

He explained that according to the Supreme Leader, the American presence in Iraq is ‎nothing but destruction for the people of this country and noted, “The Iranian people ‎have proved that they want the independence of Iraq and have no eyes on the territory ‎of this country. We’re neighbours of Iraq and we have a lot in common. Therefore, all ‎these elements go hand in hand to keep these two nations together.”‎

Emphasizing out that the Iraqi people can better secure themselves without the ‎presence of the United States, Ayatollah Hoseyni-Bushehri said, “Today, the Popular ‎Mobilization Forces can protect Iraq’s borders and maintain its territorial integrity. As a ‎neighbouring country, we will prove our loyalty to the interests of the Iraqi people.”‎

His Eminence stated that the United States intimidates Iran in order to continue its ‎presence in the region and added, “American interests are secured by creating divisions ‎among Islamic nations. The greater the division among Muslims, the more profitable ‎the United States will be by selling weapons and military equipment.”‎

He pointed out that if there is a lot of unity among Muslims, the United States cannot ‎do anything and said, “Unfortunately, some leaders of Islamic countries are influenced ‎by the instincts of the enemies and instead of unity and solidarity with the religious ‎brothers, they approach the Zionist regime and the enemies of the Islamic nations.”‎

Ayatollah Hoseyni-Bushehri referred to the statements of the Supreme Leader regarding ‎the severe revenge against the enemies following the assassination of Martyr Soleymani ‎and added, “The enemies can’t be kept unanswered. It should be said that the missile ‎attack on the Ayn al-Asad Airbase [in Iraq] was a slap in the face and the enemies will ‎soon receive the main answer and will have to wait for Iran’s severe revenge.”‎