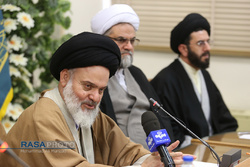 Stating that Iranian people are fully committed to the ideals of the Islamic Revolution, Ayatollah Hosseini Boushehri said: “The Iranian people will not stop fighting the enemies until they reach their ultimate goals.”

RNA - On the sidelines of 22 Bahman (February 11) rally, Ayatollah Seyyed Hashem Hosseini Bushehri, secretary of the Supreme Council of Seminaries, said: “We must congratulate the Iranian powerful people for this magnificent and epic presence.”

“This day is a reminder of the sacrifice of revival of Islam, the dignity and honor of the Islamic Ummah. We are glad that despite the plots of the enemies of Islam, the people are steadfastly defending the Islamic Revolution of Iran”, Ayatollah Boushehri said.

“Iranian people showed that if the enemies of Iran assassinate their brave general, (Lieutenant General Qassem Soleimani), they would stand firm and would defend the Islamic and its achievements in all the scenes”, Ayatollah Boushehri stated.

“Iranian nation have pledged allegiance to late Imam Khomeini and the supreme leader Imam Khamenei and promised them to continue their fight against the enemies until they reach the final goals of the Islamic Revolution. These rallies will be continued year after year”, Ayatollah Boushehri concluded.