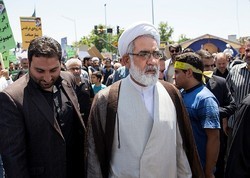 “Enemies should know that with the presence of these revolutionary and insightful people, they will never achieve their sinister goals”, Hujat al-Islam Mohammad Jafar Montazeri said.

RNA - Considering the epic presence of Iranian nation in annual march of 22 Bahman (February 11) as a factor for hope for Irania society, hujat al-Islam Mohammad Jafar Montazeri, Attorney-General of Iran said, “Enemies should know that with the presence of these revolutionary and insightful people, they will never achieve their sinister goals.”

During the annual march of 22 Bahman (February 11) in holy city of Qom, hujat al-Islam Mohammad Jafar Montazeri, Attorney-General of Iran said, “This year the nation’s presence in the march is divine and unprecedented.”

“The mass presence of people all over the country, including Qom, the fountain of the revolution, is remarkable, and we hope that this presence will make people hopeful like previous years”, Montazeri said.

“Enemies of Iran should know that by the support and presence of Iranian nation, they won’t achieve their sinister goals”, Montazeri Added.