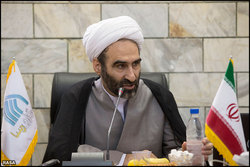 Referring to the mass presence of the Iranian people in different scenes, especially 22 Bahman rallies, Hujat al-Islam Moballeghi said, “Today by their presence Iranian people disappointed the enemy and withdrew the enemy.”

RNA - Referring to the mass presence of the Iranian people in different scenes, especially 22 Bahman rallies, Hujat al-Islam Moballeghi said, “Today by their presence Iranian people disappointed the enemy and withdrew the enemy.”

Speaking to reporters on the sidelines of a 22 Bahman (February 11) rally in Qom, Hujat al-Islam Ahmad Moballeghi, a member of the Assembly of Experts said that the Iranian people have always stood by the ideals of the Islamic revolution and Imam Khamenei.

“Today, by the support of the Iranian nation, the Islamic Revolution has gained a special status and with their epic presence, people have once again have demonstrated to the world their support and loyalty to the Islamic revolution”, Hujat al-Islam Moballeghi said.