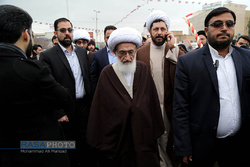 Ayatollah Nouri Hamedani described the presence of millions of Iranians in 22 Bahman (February 11) rally as a demonstration of the greatness of the revolution and said: The message of this epic presence is the decisive confrontation against the enemies.

RNA - Answering reporters' questions on the sidelines of 22 Bahman (February 11) rally in Qom, Ayatollah Hossein Nouri Hamedani, prominent source of emulation, appreciated the revolutionary presence of the Iranian nation in demonstrations marking 41st anniversary of the victory of the Islamic revolution, said, “The people’s epic presence is a display of the glory, unity and grandeur of the Islamic Revolution.”

Emphasizing that the presence of the Iranian people in the march is a punch to the face of big mouth Americans, Ayatollah Nouri Hamedani stated, “The Iranian people today have declared their hatred and resentment to American terrorists.”

“This unity and glory to defeat the enemies and accelerate achieving to the goals of the Islamic Revolution and its ideals”, Ayatollah Hamedani Added.