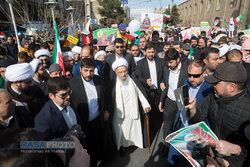 Ayatollah Makarem Shirazi described the mass presence of Iranian nation as a tough hit in the face of US and other enemies of Iran.

RNA - Ayatollah Naser Makarem Shirazi described the mass presence of Iranian nation as a tough hit in the face of US and other enemies of Iran and said, “This presence shows the loyalty of Iranian nation to the (Iranian) Islamic system and the Islamic values.”

“Thanks to God, Iranian noble nation added another page to their reputation book”, Ayatollah Makarem said and added, “The Iranian people showed that they don’t pay attention to the false propaganda of the enemies and they in fact hit the US in the mouth.”