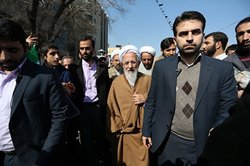 Ayatollah Javadi-Amoli insisted that officials must not allow people to suffer and added, “The officials must show gratitude to the people by providing economic security and comfort to them.”

“Our message to all freedom-seekers in the world and to the free people is to elect those who don’t think about the Deal of the Century and other acts of oppression,” the revered source of emulation added.

The prominent teacher in the Islamic Seminary of Qom emphasized that the officials must continue to perform the expansion in production that was recommended by the Supreme Leader of the Islamic Revolution and added, “The officials must bring security, comfort and economic peace to the people.”