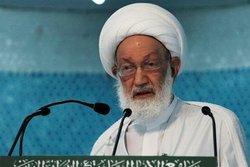 RNA - In a statement carried by Arabic-language Lua Lua TV network on Wednesday, Sheikh Qassim stressed that the brutal US strikes on the popular Iraqi forces, who are “defending the nation’s religion and dignity,” had been highly anticipated.

The American attacks should be considered not only an act of “aggression against all of Iraq, its security, freedom, independence, civilization and wealth, but also one against the entire Muslim Ummah,” read the statement.

The Bahraini cleric said the bloody strikes were “a crushing blow to human dignity” and “an entrenchment of the law of the jungle.”

All people, it added, have the right and indeed a duty to stand firm against such aggression.

The statement also said that it was “very painful ... and very shameful” that some regimes in the Arab world, alongside Israel, announce their official support for the US aerial assaults in Iraq.

On Sunday, the US conducted airstrikes on bases belonging to Kata’ib Hezbollah, which is a part of Hashd al-Sha’abi, in Iraq's western Anbar Province near the Syrian border.

As many as 31 fighters from the popular forces lost their lives and dozens more sustained injuries in the attacks.

Bahrain — along with Saudi Arabia — was quick to voice support for the US raids, claiming that they were a response to “repeated criminal acts” of Kata’ib Hezbollah.

Israeli Prime Minister Benjamin Netanyahu also lauded what he called "the important operation by the United States" in a phone call with US Secretary of State Mike Pompeo.

The raids, however, drew a wave of damning reactions from officials and movements across the region, and triggered furious public protests outside the US embassy in Baghdad.

Iraqi people held two days of angry protests outside the US diplomatic mission, calling on the Iraqi government and parliament to expel Americans. On the first day, a group of the demonstrators attacked the compound and set fire to its gates, prompting clashes with security forces.

The confrontation prompted US President Donald Trump to order 750 troops to the Middle East.

But by Wednesday evening, Iraqi protesters had cleared away from the embassy compound’s entrance in response to a government call, paving the way for the security forces to regain control of the area.

“We have issued the order for everyone to withdraw, because America should have received our message,” a spokesman for Kata’ib Hezbollah told CNN.

According to Press TV, Mohamad Mouhiye further emphasized that the demonstrations were only a “first step,” and that the US should shut down its embassy and withdraw from Iraq.

“The American administration should understand the following: the first step was to protest near the American embassy, we are waiting their reactions to determine the second step,” he said.

“First, close the doors of the evil embassy, which we consider a spy building and an operations room to administer and sabotage Iraq's well-being. We also call on the US to withdraw their military forces which are in Iraq illegally,” he added.

In another development on Wednesday, the Lebanese Foreign Ministry condemned the US strikes in Iraq.

It expressed hope that calm and security would be restored in Iraq as soon as possible by respecting the country's sovereignty and adhering to the principles of diplomatic relations, the Lebanese National News Agency (NNA) reported.