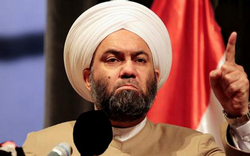 Referring to the latest events in Iraq, the head of the Iraqi scholars’ community warned that the Americans are preparing for a new Iraq.

RNA - In an interview with Al Mayadeen TV channel, Sheikh Khalid al-Mulla, head of the Iraqi scholars’ community said, “Enemies of Iraq exploit every means to disintegrate the Iraqi governmen; even some of the Arab countries do not accept the current Iraqi system.”

“Some political parties are seeking to wage war among Shiite groups, and Iraqi Shiite political classes have also been targeted. Some satellite channels are leading demonstrators to clash with the Iraqi armed forces (Regular army and Hashd al-Shabi). Meanwhile, some figures close to the US have announced the start of a new phase in the country, struggling for civil war and the collapse of the current Iraqi state”, Sunni scholar warned.

Sheikh Khaled al-Mulla announced that some American officials met him and said, “They meet different Sunni figures by whom they could be able to achieve their evil plans.”