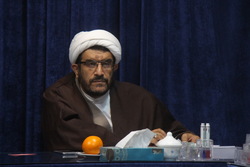 Hujjat al-Islam Hajari, secretary of the Islamic Revolution's Scientific Discourse Plan, presenting a report on the project’s activities, said, “So far we have received 2,500 book titles in 3,000 book volumes from only 16 institutions.”

RNA - Hujjat al-Islam Hajari, secretary of the Islamic Revolution's Scientific Discourse Plan, presenting a report on the project’s activities, said, “So far we have received 2,500 book titles in 3,000 book volumes from only 16 institutions.”

Speaking to reporters at the inauguration of the permanent exhibition of top works in the field of Islamic Humanities, Hujjat al-Islam Hajari, the secretary of the scientific associations of the field, saying that this permanent and specific exhibition is for products of the Plan of the Scientific Discourse of Islamic Revolution, noted, “The main focus of this project is systematically identifying the most outstanding and premier works in the Islamic humanities and systematically introducing them to the domestic and foreign scientific community.”

He described the failure of introducing the masterpieces of Islamic Humanities as one of the cultural nodes of the Islamic scientific community, and continued, “There is a cultural deficiency in various fields, especially in research, editing and publishing: there are no investments for introducing works that are produced.”

“After receiving the best and selected works of seminaries and universities scientific community of in the field of Islamic humanities, they will be introduced to different scientific societies in accordance with the plan of the scientific discourse of the Islamic Revolution,” he continued.