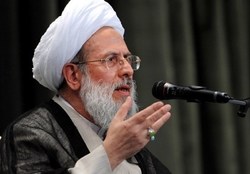 Speaking before his advance seminary teachings in Shahr-e-Rey, Ayatollah Muhammad Muhammadi Rayshahri said, “Allah (SwT), holy prophets and The Fourteen Infallibles are in highest level of guidance and they are the most perfect propagators.”

“From the US the criminal who claims the guidance the world to so-called clerics who mislead people, there are many so-called propagators in our era.”

Ayatollah Muhammad Muhammadi Rayshahri, the representative of the Iranian Assembly of Experts of the Leadership added, “Fake guidance people are who introduce themselves as scholars but they aren’t, but real guidance is Ahl al-Bayt (A.S).”

“Real guide has specifications one of which is that he has removed the clothes of hypocrisy and Ryia and he never follow his own mundane desires; he just follow his divine duties which pleased Allah (SwT)”, Ayatollah Rayshahri added.

“If one doesn’t wipe out the clothes of Ryia and worldliness, he could not guide others, and if he doesn’t follow the mundane desires, this very act will open all the (felicity) paths”, Ayatollah Rayshahri underlined.

“If someone reaches this rank, he will be the source of the faith and people could follow him and extract the rules of religion from them. A real guide should coincide himself with the justice. The first step of the justice is avoiding mundane desires because a man who follows the Nafs (one’s desires) cannot be Just”, Ayatollah Reyshahri concluded.