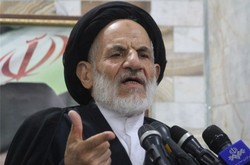 Hojjat al-Islam Ebadi said, "In order to save the country from many problems, people need to be careful in their choice in the parliament election."

RNA - In a meeting with cultural and political activists in Birjand, Hojjat al-Islam Ebadi, Representative of the Supreme Leader in South Khorasan and Friday prayer leader of the city said, “With research about candidates, we should select the best ones in the election.”

“Majlis (Iran’s parliament) has the highest priority in Iran’s affairs and according to the country’s constitution it should construct a road in which the government can move”, Ebadi noted and emphasized, “For saving the country from many hardships, people need to be careful in their choice in the parliament election.”