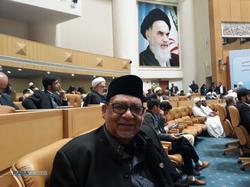 In an interview with RNA, Hanif Hendrics Muslim Member of South African parliament and the leader of the Ozama (not audible) only Muslim political party in the country, emphasized on the strong position about Palestine.

“Very recently the (S African) Minister of the International relations told the world that we (world nations) are cowards for not implementing the resolutions of the United Nations (on Palestine) to end occupation in Palestine”, Hendrics added and said, “Our political party introduces motions in support of Palestine and the latest motion we succeeded in is in Johannesburg that we rename the most important street which was previously called Center Drive to Leyla Hali Drive just to create awareness about the struggles in Palestine”.

In response to a question about the importance and current situation of unity among Muslims in South Africa, Mr. Hendrics said, “I think it (the Muslim Unity Conference) is a good start for Muslims countries to unite but they have neglected Africa. They must see Africa as a continent like one country, (because about) 70 percent of African people are Muslims and should be more representation of African delegations in conferences like Muslim Unity Conference.”

“The Saudi regime does not reflect Saudi people and the people are very close to every other country and they always show their brotherhood and sisterhood which are not reflected in Saudi government’s policy”, Hendrics stressed.

At the end Hendrics said, “It is very important for the Iranian people to know what role Iran played in liberation struggles in South Africa in 70s, 80s and 90s when we had thought that there is no hope to end the Apartheid and oppression. (But) the revolutionary ideas of Imam Khomeini assisted us as we touch the bullets in trenches and we were very excited when Imam Khomeini liberated Iran and the Iranian revolution to (not audible) and it gave us hope for our own liberation. That’s why you find the South Africans had been motivated and inspired by the revolutionary ideas of Imam Khomeini. And that’s why we take strong position that while we got freedom in 1994, we are not really free until Palestine is not free. Because Imam Khomeini asked us (Muslims) to march on every last Friday in Ramadan for the liberation of Palestine. We (Muslims) should march for liberation of Palestine. I want to say that the Muslims we are associated with, we have taken part in the Quds March because we are inspired by the revolutionary ideas of Imam Khomeini. That’s why every year the last Friday of Ramadan we took part in the important event in the Muslim community which is the Quds day. There is rally in Quds day in South Africa and the rally used to be led by Ahmed Kathrada who was in the prison by Nelson Mandela in Robben Island. He was inspired by ideas of Imam Khomeini.”

Representative of Hamadan in the Assembly of Experts:‎

The people are separate from the rioters

Ayatollah Sa’idi at Rally in Support of the Islamic Revolution:

The Iranian people will not allow evildoers to ‘ride the wave’ ‎

Security bodies must seriously deal with the saboteurs

Rioting isn’t compatible with the logic of protesting

What If Your Boss Tells You To Do Something Haram