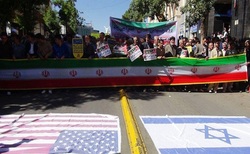 RNA – While countrywide demonstrations marking International al-Quds (Jerusalem) Day ‎have been cancelled in Iran due to the coronavirus outbreak, a series of exceptional plans ‎has been formulated to mark the event, an official said.‎

However, a special and exceptional event will be held in honor of the al-Quds Day on the last ‎Friday of the holy month of Ramadhan, he added, noting that the Supreme Leader of the ‎Islamic Revolution, Ayatollah Sayyed Ali Khamenei, will deliver a speech to the Islamic ‎ummah (community) on May 22.‎

The Supreme Leader’s speech will be aired live on local and international radio and television ‎channels, he added.‎

In order to make the most of Ayatollah Khamenei’s speech, no other event will be held in ‎any part of the country in the name of al-Quds Day plans, the official stated.‎

In early May, General Ramazan Sharif, the head of the Intifadhah (Uprising) and the al-Quds ‎Centre at Iran’s Islamic Propagation Coordination Council, said this year’s al-Quds Day rallies ‎won’t be held since the situation is not normal in the wake of the outbreak of COVID-19.‎

Unveiling plans for the Leader’s speech on the al-Quds Day, the general said the organizers ‎of the event will take advantage of the media and receive messages from anti-Israeli ‎resistance officials.‎

He said Ismail Haniyeh, the chief of the political bureau of Islamic resistance movement ‎Hamas, or another major figure of resistance will possibly take part in the al-Quds Day ‎commemorations in Tehran as a guest.‎

The International al-Quds Day is an annual event during which demonstrators express their ‎solidarity with the Palestinian people and opposition to the occupation of the Palestinian ‎territories by the Zionist regime of Israel.‎

The day is seen as the legacy of the late founder of the Islamic Republic of Iran, Imam ‎Khomeyni, who officially declared the last Friday of the holy month of Ramadhan as ‎International al-Quds Day back in 1979.‎