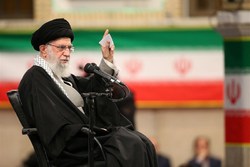 The Supreme Leader of the Islamic Revolution said the Islamic Republic of Iran will “support ‎and assist any nation or any group who opposes and fights the Zionist regime” of Israel.‎

RNA – The Supreme Leader of the Islamic Revolution, Ayatollah Sayyed Ali Khamenei, said ‎the Islamic Republic of Iran will “support and assist any nation or any group who opposes ‎and fights the Zionist regime” of Israel.‎

‎“We will support and assist any nation or any group anywhere who opposes and fights the ‎Zionist regime, and we do not hesitate to say this,” the Leader said in a tweet on ‎Wednesday ahead of International al-Quds Day.‎

In another tweet, the Leader said, “Comprehensive struggles by the Palestinian nation - ‎political, military & cultural - should continue till the usurpers submit to the referendum for ‎the Palestinian nation. This nation should determine what political system should rule there; ‎struggle must continue until then”.‎

‎“A proposal for a referendum to choose the type of govt for the historical country of ‎‎#Palestine was registered with the UN as offered by Iran. We say the true Palestinians with ‎Palestinian roots of at least 100 years, and Palestinians living abroad, choose the govt of ‎Palestine,” he said.‎

‎“The Zionist regime has proven it won’t abide by any treaty & understands no logic except ‎force. The nature of the Zionist regime is incompatible with peace, because the Zionists seek ‎to expand their territories & will certainly not be limited to what they have already occupied,” ‎he said.‎

International al-Quds Day is an annual worldwide event during which demonstrators express ‎their solidarity with the Palestinian people and opposition to the occupation of the Palestinian ‎territories by the Zionist regime of Israel.‎

The day is seen as the legacy of the late founder of the Islamic Republic of Iran, Imam ‎Khomeini, who officially declared the last Friday of the holy month of Ramadan as ‎International al-Quds Day back in 1979.‎