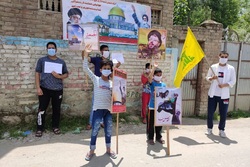 Saif Ali Budgami described the events that took place in Kashmir on the occasion of ‎International al-Quds Day. ‎

RNA – In an exclusive report for Rasa News Agency, Saif Ali Budgami, an activist in Indian-‎occupied Kashmir, described the events that took place in Kashmir on the occasion of ‎International al-Quds Day. ‎

Despite the lockdown caused by COVID-19 (Novel Coronavirus), the people of Indian-‎occupied Kashmir joined the world and managed to mark International al-Quds Day via ‎various ways, including on social media platforms, Twitter, Facebook, Instagram, as well as ‎via marches, sit-in protests and by waving flags. The hashtags that were used on social ‎media included #FlyTheFlag #QudsDay2020 #FreePalestine and #DeleteIsrael. The regional ‎and similarly occupied and oppressed lands such as Kashmir, Nigeria, Yemen, Bahrain, ‎Afghanistan added other hashtags, including #FreeKashmir #FreeZakzaky ‎‎#EndWarOnYemen.‎

International al-Quds Day is annually marked on the last Friday of Ramadhan and was ‎initiated by Imam Ruhollah Khomeyni, the founder of Iran’s Islamic Revolution of Iran, in ‎‎1979 to express support for the Palestinians and oppose Zionism and Israel. It also exists in ‎opposition to Jerusalem Day, which was established by Israel on May 12, 1968, and which ‎the Knesset made a national holiday in 1998. Since its initiation, International al-Quds Day ‎has received an overwhelming response throughout the world and is being celebrated with ‎keen interest in every nook and corner of the world in opposition to the illegal occupation of ‎Israel on Palestine, irrespective of religion.‎

‎“If someone came and took over your house, a hundred years later, it will still be your ‎home to which you have a right. Palestine is home for the Palestinians,” Mohammad Abbas, ‎a Kashmiri activist, wrote on his Twitter account in protest against the illegal occupation of ‎Palestine on International al-Quds Day.‎

Although its symbolic name refers to the Palestinian city of al-Quds, which was the first ‎qiblah (direction of prayer) for Muslims, it is dedicated to every oppressed person and ‎occupied land in the world. In celebration of this occurrence, people in many places ‎throughout Kashmir took banners of Palestine and marched on the roads or flew flags from ‎their windows, verandahs and the rooftops of the houses. Some were witnessed chanting ‎‎“Free Kashmir! Free Palestine! Netanyahu you will see, Palestine will be free! Donald Trump, ‎you will see, Palestine will be free! Narendra Modi, you will see, Kashmir will be free!” in ‎echoing and loud voices from the local hilltops. Some managed to carry out sit-in protests in ‎compliance with proper social distancing guidelines in their respective areas to mark ‎International al-Quds Day. ‎ 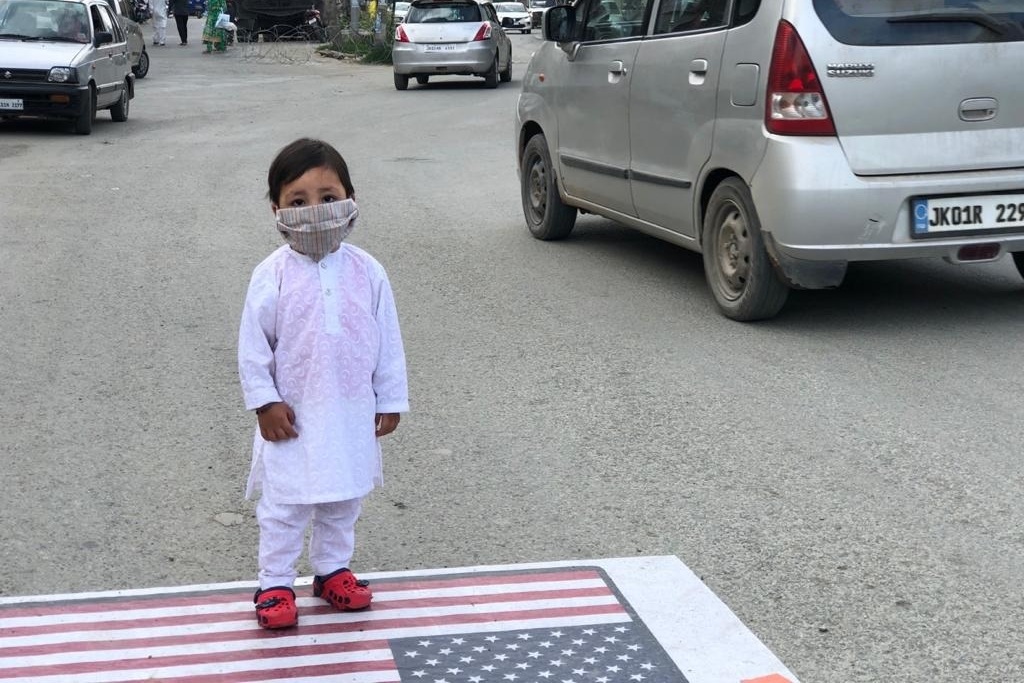 Image: A Kashmir child protests against the United States in Kashmir

A local citizen, Nazer Ahmad Mir of Magam, a town located in the district of Budgam in ‎central Kashmir, managed to hold a sit-in protest in a local park. People of all ages, from ‎small children to elders carried placards on which was written various anti-Israeli and pro-‎Palestinian slogans. ‎

‎“We maintained rigorous social distancing due to the Coronavirus,” he added.‎

Mir emphasized, “We hold a huge protest each year, along the national highway that leads ‎to Gulmarg, a world-renowned picnic spot in which thousands of people joined after Friday ‎prayers. But this year, the lockdown didn’t allow us to do so. Therefore, people in various ‎areas managed to protest separately in their respective localities in fear of the spread of the ‎Coronavirus.”‎

Those who could not join in the protests in any manner managed to convey their messages ‎through other means, such as via small podcasts and videos containing messages protesting ‎the illegal occupation of Israel and Palestine.‎

‎“Due to the lockdown people could not come out and protest but I am glad to see how ‎people have flooded their social media accounts with posts and pictures to let people know ‎what al-Quds Day is truly about,” Aneesa Khan, a female journalist from Budgam, explained. ‎

She had previously uploaded a video urging people to protest via their social media ‎platforms more strongly than ever before. ‎

The most unique and inspiring part of this year’s protest was that people placed pictures of ‎the American President Donald Trump, and the Israeli Prime Minister Benjamin Netanyahu ‎and flags of Israel and the United States on the roads then tread and stomped on them. ‎Some small children in the town of Budgam were seen spitting and jumping on these pictures ‎in an expression of their anger and dissent toward those tyrants.‎