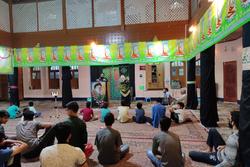 RNA – According to Ovain Ali, a revolutionary student in Indian-occupied ‎Kashmir, ‎celebrations ‎marking Eid al-Ghadir, which marks the appointment of Imam Ali as the ‎‎successor of ‎Prophet Muhammad, were held in Indian-controlled Kashmir, as they are very ‎‎year. ‎

Amid the COVID-19 pandemic, Muslims in Indian-occupied Kashmir, which is the only Muslim-‎‎‎majority state of India, commemorated Eid al-Ghadir and observed the health protocols ‎‎‎with full exuberance and religious fervour. A small number of congregational prayer ‎‎‎gatherings and ceremonies were held across the region to mark the occasion.‎

A ceremony was held in northern Kashmir’s Delina area of Baramulla District which was ‎‎‎attended by locals. The speaker Javid Hasan Bhat (a seminary student in Qom) discussed ‎‎‎the different aspects of Eid al-Ghadir and highlighted the wisdom of Imam Ali. ‎

Eid al-Ghadir is the anniversary commemorating the last sermon of the prophet of Islam ‎‎‎after his farewell Hajj pilgrimage at Ghadir Khumm [the Pond of Khumm] between Makkah ‎‎‎and Madinah in which the Holy Prophet, where acting upon the divine guidance, he ‎‎‎designated his cousin and son-in-law, Ali ibn Abi Talib, as his immediate successor.‎

For people in Kashmir, Eid al-Ghadir holds special significance, which is reflected by ‎‎‎ceremonies and events organized every year to celebrate the occasion but this year due to ‎‎‎COVID-19, fewer ceremonies were held in Kashmir.‎