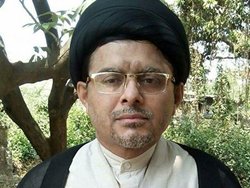 Hujjat al-Islam Shabib stated, “The Zionist regime is as dangerous as the Coronavirus and ‎the only way to save the Islamic ummah from this vicious virus is to follow the orders of the ‎Supreme Leader.”‎

RNA – As International al-Quds Day approaches, the second conference on “Institutionalizing ‎the ‎Normalization of Relations, The Insistence of the Arab Rulers and the Opposition of the ‎‎Nations” was held via video conference at the headquarters of Rasa News Agency in Qom.‎

Prominent figures from India and Pakistan, such as Hujjat al-Islam Sayyed Muhammad-Kazim ‎Shabib, the Friday prayer leader of Muzaffarpur, Bihar, India, and Hujjat al-Islam Mazhar-‎Husayn Shahidi, a researcher and seminary and university teacher from Pakistani Kashmir, ‎participated in the webinar and examined the support of the Arab rulers for the crimes of the ‎Zionist regime in Palestine.‎

Hujjat al-Islam Shabib emphasized the insight of the people of the world and stated, “Some ‎carry the name of Islam and are seemingly Muslims, and in reality, are Jews who follow the ‎path of the enemies’ goals.”‎

Referring to the betrayal of Muslims by some Arab reactionary countries, he said, “We have ‎a general criterion, and that is that anyone who is friends with the Zionist regime will never ‎be a true Muslim, and one must look for Jewish roots among his ancestors. A true Muslim is ‎one who doesn’t allow oppression against Muslims and opposes oppression.”‎

The Indian scholar said, “The normalization of relations between some Arab countries ‎through the production of Ramadhan serials on the subject of institutionalizing normalization ‎with this occupying regime is a vicious act and is a blow to Muslims and a betrayal of the ‎Islamic and Arab people.”‎

Referring to the actions of some rulers of Arab and Islamic countries in violating Islamic law, ‎Hujjat al-Islam Shabib said, “Unfortunately, some rulers of Arab countries, who don’t meet ‎the conditions of leadership of the Islamic ummah and openly violate the rules of Islam and ‎issue licences permitting gambling, the drinking of wine, concerts and dancing etc. in their ‎countries, dream of leading the Islamic ummah.”‎

The Friday prayer leader of Muzaffarpur stated, “Imam Khomeyni’s wise action to hold ‎International al-Quds Day on the last Friday of the holy month of Ramadhan has been a ‎valuable action for the Islamic ummah, which led to the remembrance of the issue of the ‎holy city of al-Quds forever. The Islamic ummah must remain and its liberation must be ‎placed at the forefront of Muslims’ priorities.”‎

He said, “Some countries think that the Zionist regime is their friend and always with them. ‎This is a stupid fantasy because by examining history, you will conclude that the Zionist ‎regime is a sheep in wolf’s clothing.”‎