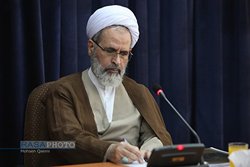 RNA – In a letter to the religious and spiritual leaders of India, Ayatollah Alireza Arafi, the ‎director of Islamic Seminaries of Iran, referred to the outbreak of COVID-19 (Coronavirus) in ‎different countries of the world, while expressing sympathy with the victims of all religions ‎and nations of the world and expressed hope that all disasters and unrest in the world, ‎especially in India, would be over.‎

Emphasizing the necessity of following the doctors’ recommendations in dealing with the ‎outbreak of the Coronavirus, he called such disasters a divine examination which leads to the ‎evolution and insight of man and ascendancy into resurrection and God Almighty, and said, ‎‎“Explaining the correctness and rationality of such incidents and how to deal with them and ‎avoiding the unrealistic bipolarity of science and religion is one of the duties of the elites and ‎officials, in regard to which religious leaders and scholars have a double responsibility.”‎

Ayatollah Arafi said that countering this challenge and other contemporary crises such as ‎injustice, undue discrimination, inhumane sanctions, environmental crises, war, terrorism and ‎the production and possession of weapons of mass destruction requires international ‎consensus, cooperation and a comprehensive response to the irresponsible policies of some ‎hegemonic countries and unilateralist laws and the comprehensive fight against corruption, ‎discrimination, sanctions, anti-justice and morality and spirituality and sincere adherence to ‎common human and religious teachings. ‎

The Friday prayer leader of Qom added, “True religious leaders have always stood and will ‎stand on their devotion and covenant with the absolute essence of existence and service to ‎humanity. These days, in the Islamic Republic of Iran, we are witnessing indescribable ‎manifestations of voluntary movements and extensive cooperation between the government ‎and various segments of the nation, including the clergy, Islamic Seminaries, religious ‎leaders, students of religious sciences and relief workers who are led by religious authorities ‎‎(sources of emulation) and the Supreme Leader of the Islamic Revolution [Ayatollah ‎Khamenei]. We are Islamic and we are proud of this heavenly bond.”‎

At the end of the letter, Ayatollah Arafi emphasized, “The Islamic Seminaries, elders, ‎teachers and students are ready to exchange academic, research, cultural and relief ‎experiences, especially in the online field, a new chapter of consensus and cooperation with ‎international academic centres and religious centers and leaders of religions and countries of ‎the world, especially the religious and spiritual leaders of India, should start with this ‎conversation and interaction to form a single line of religions in the service of humanity and ‎build a new religious and spiritual civilization.”‎

Military parade held in Qom with a speech by Ayatollah Arafi

Head of the Islamic Seminaries of Iran