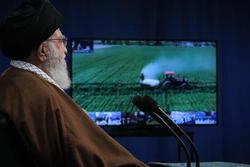 Ayatollah Khamenei says an economy made robust through enhanced production can fend ‎for itself and counter various intrusive elements such as sanctions that can harm an ‎economy like a virus can hurt the human body.‎

RNA – The Supreme Leader of the Islamic Revolution, Ayatollah Sayyed Ali Khamenei, says ‎an economy made robust through enhanced production can fend for itself and counter ‎various intrusive elements such as sanctions that can harm an economy like a virus can hurt ‎the human body.‎

Ayatollah Khamenei made the remarks in Tehran on Wednesday during a video call with ‎representatives of several manufacturing conglomerates on the occasion of the national ‎Labour Week.‎

The Leader felicitated the Iranian workforce on the occasion during the call that was made as ‎a means of overseeing the implementation of the slogan “Jump in Production” that Ayatollah ‎Khamenei has assigned to this solar calendar year.‎

The Leader drew an analogy between a country’s economic apparatus and the human body, ‎noting how both require a healthy defense mechanism to repel incoming viruses.‎

‎“This very coronavirus entered people’s bodies, but many did not fall ill. How did that ‎happen?” Ayatollah Khamenei explained that a strong immune system was what enabled a ‎successful fight against viruses.‎

‎“Should we want to liken the economy to human body, the defense system that provides ‎the economy with security would be production,” the Leader pointed out. “In other words, ‎the element that can neutralize invasive viruses and microbes targeting the economy and ‎keep it healthy is production,” Ayatollah Khamenei stated.‎

The Leader categorized the invasive economic factors into “natural viruses” and ‎‎“manufactured viruses such as sanctions and [the manipulation of] the oil price.”‎

‎“However, if we have good production [levels], we can resist these viruses,” Ayatollah ‎Khamenei said.‎

The Leader called for the improvement of Labour relations countrywide as a means of ‎securing the desired production levels.‎

Ayatollah Khamenei called for “genuine cooperation” between employees and their ‎employers.‎

The employees, the Leader said, should act more responsibly and rigorously, while the ‎employers need to assign a bigger share of revenues to the workforce.‎

Ayatollah Khamenei recalled that Labour relations have been underlined in the “Resistive ‎Economy” planning that the Leader has previously pioneered in the face of enemy ‎maneuvers.‎