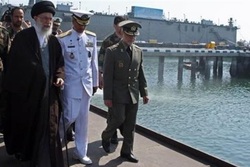 The Supreme Leader of the Islamic Revolution says Iran has a ‎key role in keeping the security of the Persian Gulf.

RNA – Ayatollah Khamenei, the Supreme Leader of Iran’s Islamic Revolution, says Iran has a ‎key role in keeping the security of the Persian Gulf, and the presence of extra-regional forces ‎threatens any initiative that could benefit the people of the region.‎

In a series of tweets published on the Twitter page of Ayatollah Sayyed Ali Khamenei on ‎Wednesday, the Leader also said that the Persian Gulf belongs to the nations living there, ‎and those are the ones responsible for ensuring its security.‎

‎“Iran with its long coastlines has a key role in keeping the security of this region. By God’s ‎grace we will do our part. This is our historical, geographical and regional duty,” said one the ‎tweets, which were posted on the occasion of the National Persian Gulf Day.‎

The Persian Gulf belongs to the nations living there. Its security is the duty of these nations, ‎& Iran with its long coastlines has a key role in keeping the security of this region. By God’s ‎grace we will do our part. This is our historical, geographical & regional duty. ‎pic.twitter.com/frlXXdYq0c
‎— Khamenei.ir (@khamenei_ir) April 29, 2020‎

The Leader also said that a “wise and rational collective policy” in favor of the people of the ‎region cannot be achieved while foreign forces are present in the Persian Gulf.‎

The #PersianGulf region can be managed by a wise and rational collective policy that ‎benefits all Persian Gulf countries. The factor that threatens such a proper, wise move is the ‎presence of foreign forces in the region.‎

‎— Khamenei.ir (@khamenei_ir) April 29, 2020‎
‎ ‎
The #PersianGulf is our home & the place for the presence of the great #IranianNation. The ‎shores of the Persian Gulf & much of the Gulf of Oman, belong to this nation, & it should be ‎present there. It should demonstrate its power. We’re a powerful nation with a great history.‎
‎— Khamenei.ir (@khamenei_ir) April 29, 2020‎

‎“The Americans should know that this waterway is called ‘the Persian Gulf.’ It is not called ‎‎‘the New York Gulf’ or ‘the Washington Gulf,’” President Rouhani told a cabinet session in ‎Tehran.‎

The remarks came against the backdrop of Washington’s incessant acts of military ‎adventurism in the Persian Gulf region.‎

‎“They should understand the circumstances [surrounding the body of water] by taking into ‎consideration both its name and the nation that has preserved it for thousands of years, ‎and, therefore, stop hatching plots against the Iranian nation every day,” Rouhani stated.‎

US President Donald Trump alleged in a recent tweet that he had ordered the US Navy to ‎‎“shoot down and destroy” Iranian gunboats that “harass” American ships, following a recent ‎confrontation between US warships and Iranian military boats in the waters.‎

The IRGC denounced the American vessels for their “unprofessional and perilous” behavior in ‎the waterway, and said they had “caused trouble” for one of the elite force’s logistics ships ‎that was on a routine patrol.‎

A US Navy statement claimed that about a dozen IRGC boats had approached several US ‎naval vessels in the Persian Gulf “in dangerous and harassing” ways.‎