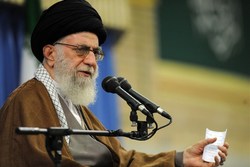 The Supreme Leader ordered the Iranian Army to launch an inquiry into an accident in a ‎recent naval training exercise that resulted in the martyrdom of 19 servicemen on board ‎‎‘Konarak’ support vessel in the Sea of Oman.‎

RNA – The Supreme Leader of the Islamic Revolution, Ayatollah Sayyed Ali Khamenei, ‎ordered the Iranian Army to launch an inquiry into an accident in a recent naval training ‎exercise that resulted in the martyrdom of 19 servicemen on board ‘Konarak’ support vessel ‎in the Sea of Oman.‎

Ayatollah Khamenei on Tuesday sent a message of sympathy to Iranian Army Commander ‎Major General Abdolrahim Mousavi over the martyrdom of Navy forces in the fatal accident ‎in the country’s southeastern waters.‎

The Leader said the tragic accident involving Konarak vessel that resulted in the martyrdom ‎of a number of Navy servicemen has been “very bitter and regrettable.”‎

‎“Although the hardworking servicemen who have died in the course of hard duty will ‎gloriously benefit from divine reward, God willing, the grief at the loss of the beloved ones ‎for their families and the damage of loss of the sincere hardworking young forces to the ‎Force (Navy) is so huge and heavy,” Ayatollah Khamenei underlined.‎

Offering condolences to the bereaved families of the victims of the accident and praying for ‎the recovery of the injured, the Leader ordered the relevant authorities to “shed light on the ‎dimensions of the incident, identify the ones possibly at fault, and make the necessary ‎arrangements to prevent a recurrence of such damaging and bitter incidents.”‎

Nineteen Navy servicemen were martyred in the accident involving ‘Konarak’ light support ‎vessel on Sunday evening, May 10, when a number of vessels were carrying a naval training ‎exercise off the coasts of Jask and Chabahar.‎

Fifteen Navy forces were also wounded in the incident.‎