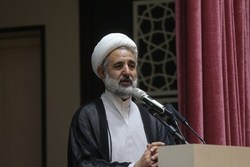 RNA – Hujjat al-Islam Mojtaba Zonnour, the chairman of the National Security and Foreign ‎Policy commission in Iran’s Islamic Consultative Assembly, underlined that Iran is not after ‎any war in the region or elsewhere.‎

RNA – Hujjat al-Islam Mojtaba Zonnour underlined that Iran is not after any war in the region ‎or elsewhere.‎

The representative of Qom the people of Qom in the Islamic Consultative Assembly ‎stressed, “We will by no means start any action resulting in a war in the region. But the ‎General Staff of the Iranian Armed Forces has warned the Americans that if they seek to ‎cause trouble, make provocative moves, and ignore Iran’s rights in the Persian Gulf and the ‎region, the Islamic Republic will not give up protecting its rights.”‎

‎“With the agility, power of deterrent operation, capabilities and mobility of its acting forces ‎in the region, the Islamic Republic of Iran will definitely make the Americans regret their ‎actions,” he said.‎

‎“The Islamic Republic neither is willing nor plans to create insecurity and war in the region, ‎but it is able to smash the hands of anybody seeking to make the region insecure and to ‎defend the (Iranian) nation’s rights vigorously,” Hujjat al-Islam Zonnour added.‎

Chairman of the National Security and Foreign Policy Committee of the ‎Iranian Parliament: ‎

Member of the National Security and Foreign Policy Committee of Iranian Parliament:‎

Clergy have been oppressed from before the Islamic Revolution until today ‎