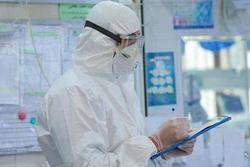 Iran’s Defense Ministry has launched the production line of liquid disinfectants and hygienic masks as the country steps up fight against a new coronavirus originating from China.

It followed an order issued by Defense Minister Brigadier General Amir Hatami to contain the coronavirus outbreak by producing at least 20,000 liters of liquid disinfectants and 20,000 filtered masks per day.

Iranian medical officials have assured that the country will soon rein in the spread of the virus, and that conditions of most of those who have contracted the disease have improved.

Earlier in the day, Morteza Rahmanzadeh, the mayor of Tehran’s 13 district who had been diagnosed with the coronavirus, was released from hospital as his health condition improved.

Additionally, Ali Abrazeh, vice-president of the University of Medical Sciences of Qom, the epicenter of the virus in Iran, said 49 coronavirus patients had been discharged as of Wednesday afternoon.

He said 432 people suspected of having been infected have been hospitalized at the city’s medical centers.

On Thursday, Iranian lawmaker Mojtaba Zonnour announced that he had tested positive for the coronavirus.

Speaking on Wednesday, President Hassan Rouhani said the coronavirus testing kits developed by Iranian experts were undergoing final tests and would enter the mass-production stage in the near future.

The virus — named COVID-19 — first emerged in China late last year and is now spreading in Europe and across the Middle East, sparking fears of a global pandemic.

Since December 2019, over 82,390 people have been infected in several countries, with more than 2,800 deaths mostly reported in China.

In Iran, the virus showed up in Qom, a destination for Muslim pilgrims from across the world. In all, the spread has taken 26 lives across the country and infected as many as 245 others, according to the figures released on Thursday by Kianoush Jahanpour, the head of public relations and information center of the Iranian Ministry of Health.

The virus causes cold- and flu-like symptoms, including cough and fever, and in more severe cases, shortness of breath. It may also worsen to pneumonia, which can be fatal.