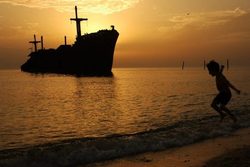 On April 30th, Iranians marked National Persian Gulf Day, which is the anniversary of the ‎victory over Portuguese troops during a war in the Persian Gulf in 1622.‎

RNA – On April 30th, Iranians marked National Persian Gulf Day, which is the anniversary ‎of the victory over Portuguese troops during a war in the Persian Gulf in 1622.‎

The occasion commemorates the exit of colonial and foreign forces from the strategic ‎waterway.‎

The tenth of the month of Ordibehesht (April 30) in the Iranian calendar marks the ‎anniversary of Shah Abbas I of Persia’s successful military campaign when the Portuguese ‎navy was forced out of the Strait of Hormuz in the Capture of Ormuz (1622), Tehran Times ‎reported.‎

In 1622, Safavid soldiers united to defeat the Portuguese, one of the supreme powers of the ‎time. The Portuguese had invaded the Persian Gulf and occupied it for more than a century ‎until then.‎

Accordingly, the 10th of Ordibehesht or April 30 has been called the National Persian Gulf ‎Day since then and is celebrated annually.‎

While there is strong evidence that the gulf originally belongs to Iran, it seems that the ‎countries in the neighborhood have recently claimed the gulf for their own interest. If ‎research is conducted carefully through the ancient inscriptions and early written works, it ‎can be clearly investigated that Iran or Persia is the true owner of the gulf.‎

The Persian Gulf is of extreme importance to Iran from two respects; firstly, its bed is a ‎great source of oil for Iran. Secondly, regarding the tourism industry, this gulf has a lot to ‎offer to Iranian and non-Iranian tourists. The best time to consider visiting the Persian Gulf ‎is from late December to mid-April when the humidity does not cause so much irritation. ‎The Persian Gulf coastline has a lot of beauties and wonders.‎

Hormuz Island, for instance, has stunning red shores. Moreover, the Mangrove Forest of ‎Qeshm is a mysterious forest in the gulf with green plants disappearing and reappearing ‎due to high and low tides. In addition, there are shiny silver planktons in some parts of the ‎gulf shore that give perfect scenery to the shores of the region at night.‎

Apart from this, the marine species and corals in the gulf are amazingly diverse and ‎interesting. Naughty dolphins, above all, are a great source of entertainment. Water sports ‎and activities of all sorts are also available in different islands, cities, and ports.‎