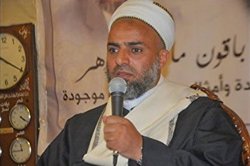 Shaykh Shamsuddin Sharafuddin said that the Saudi regime and the Zionist regime are one ‎soul in two bodies and were born of the evil policy of the United Kingdom.‎

RNA – Shaykh Shamsuddin Sharafuddin, the Grand Mufti of Yemen, said that the Zionist ‎regime is always seeking the colonization of Arab countries and explained, “All of the ‎positions of the Saudi regime regarding the administration of the two holy shrines [Makkah ‎and Madinah] are in fact in line with the interests and service of the occupying Zionist ‎regime.”‎

He added, “The Saudi regime has taken wrong positions against the actions of the Islamic ‎Resistance Front and considers the Islamic Jihad and Hamas movements as terrorists.”‎

Shaykh Sharafuddin stated that, “At the present time, we are witnessing the presentation of ‎a new model of the normalization of relations between some Arab countries and the Zionist ‎regime. They are trying to normalize such shameless actions by making television series and ‎movies.”‎

He stressed that the Saudi regime and some Persian Gulf states have gone through the ‎process of normalizing relations and are now in the process of forming an alliance with the ‎occupying Zionist regime.‎

Shaykh Sharafuddin stated that the root of the region’s problems should be sought in British ‎history, said, “The Saudi regime and the Zionist regime are one soul in two bodies and born ‎of the evil policy of the United Kingdom.”‎

It’s worth noting that the broadcast of two series on the occasion of the holy month of ‎Ramadhan on the Saudi network MBC and the attempt to demonstrate the normalization of ‎relations with the Israeli regime in these series had led to a wave of protests and criticism on ‎social media and has led to the anger of many Palestinians and media activists.‎