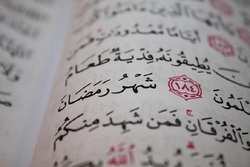 In the spiritual and intellectual dimension, the fasting person sees himself in the presence of ‎God, he does not break his fast in private and a person manages himself more easily than ‎before in the holy month of Ramadhan. ‎

RNA – It may seem that the nature of fasting does not need to be analyzed; We must not ‎eat anything from the beginning of the morning adhan (call to prayer) until the beginning of ‎the evening adhan. This is part of the truth and not all of it. This means that if a person has ‎only a physical and bodily dimension, his fast also includes only this dimension but when a ‎person has other dimensions, fasting inevitably includes those dimensions as well.‎

Dimensions of mankind and the world

As stated in Hikmah al-Muta’aliyyah (Transcendent Theosophy), mankind has at least three ‎existential dimensions: ruh (spirit), nafs (spirit) and badan (body). The spirit is the centre of ‎beliefs and insight and the heart is the centre of emotions, feelings and dispositions and the ‎body is the centre of activities, behaviours, and actions. When mankind has three ‎dimensions, he also has three needs: rational and doctrinal needs, moral and emotional ‎needs and behavioural and practical needs. What responds to these three human needs in ‎Islam is: usul al-din (the principles of religion), akhlaq (morality) and furu’ al-din (the ‎branches of religion).‎

The relationship between these three is like the structure of a building – its exterior and ‎interior. In other words, every building has a substructure, an interior and an exterior that are ‎completely coordinated, linked and interconnected like a brain, heart and arm or root, stem ‎and fruit.‎

The universe also has three dimensions of existence, including alam al-mulk (the ‎heavenly realm), alam al-mithal (the imaginal realm) and alam al-malakut (the realm ‎of dominion), which we usually refer to as the interpretations of the dunya (world), barzakh ‎‎(purgatory), and qiyamah (resurrection). Of course, what is known are the two dimensions ‎of the body, soul, the temporal world and the hereafter, which do not contradict the three-‎dimensional theory of seeing mankind and the world.‎

That mankind and the world have three forms, and not two forms or one form, is very ‎controversial. Because the thinker who sees mankind and the world in three forms will also ‎see the tools and sources of knowledge in three forms: intellect and reasoning, narration and ‎revelation, sense and experience. These three tools and sources of knowledge do not negate ‎each other and are in harmony with each other. For example, Imam Khomeyni, as a ‎philosopher and sage of Transcendent Wisdom who has been teaching transcendent wisdom ‎for more than twenty years, has the same view.‎

The dimensions of fasting

We have said that the three dimensions of human existence are completely intertwined and ‎separate in mind and on paper and therefore, this must be taken into account when talking ‎about the special act of fasting in each of these dimensions.‎

In this notion of fasting, the spirit, intellect, and belief of mankind are aware that they are in ‎the presence of God. Even if mankind does not have this sense, then according to the ‎guidance of the greats, it is necessary for him to constantly remind himself and understand ‎that he is in the presence of God and is rather, the guest of God. The supplications that ‎have been recited during this month and the emphasis placed on reciting the Quran are ‎intended to strengthen this dimension of the relationship with God.‎
‎ ‎
In the spiritual and intellectual dimension, because the fasting person sees himself in the ‎presence of God, in solitude, as it is commonly stated, he does not break his fast, even if ‎there is no one present and no one understands. This feeling of being in the presence of ‎God when fasting for thirty days accompanies the fasting person. This belief is the ‎foundation of physical and esoteric fasting and if one succeeds in understanding this ‎presence and nobility of God over oneself and the universe, fasting is real and if the fasting ‎person feels this intimate presence with his soul and intellect during other months and he ‎considers himself a guest of God and fasts in remembrance of other than God.‎

In the second dimension, which is the dispositions of mankind and the centre of lust and ‎violence in mankind, it is necessary to irrigate love and mercy in God, God‎’‎s friends and ‎servants of God, and in return, one must be at enmity with God‎’‎s enemies for the sake of ‎God. Forgiveness, generosity, self-sacrifice, love, having no grudges toward others and in ‎general, all virtues and vices are placed in the dimension such that the fasting person must ‎adorn himself with virtues and avoid vices.‎

In the third dimension, in addition to the nine prohibitions of the limbs and organs of ‎mankind, the fasting person must also avoid divine prohibitions and must not commit sins ‎through the eyes, ears, hands, feet, tongue and skin.‎