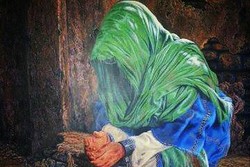 Question: What was Imam al-Kadhim’s method of dealing with Harun al-Rashid?

Harun was extremely unhappy by the fact that even with all his power and influence, he felt ‎the hearts of the people were still with Imam Musa al-Kadhim. He tried tirelessly and ‎desperately to eradicate this spiritual influence and penetration of the Imam in the people’s ‎hearts.‎

Harun was extremely unhappy by the fact that even with all his power and influence, he felt ‎the hearts of the people were still with Imam Musa al-al-Kadhim. He tried tirelessly and ‎desperately to eradicate this spiritual influence and penetration of the Imam in the people’s ‎hearts. It was unbearable to him that he was getting daily reports of the people secretly ‎paying their religious dues to the Imam Musa al-Kadhim, and through this action were ‎showing their opposition to the Abbasid government and recognizing the right of the Imam ‎to rule. It was for this reason that when he saw the Imam by the Ka’bah he said to him: “Is ‎it you that the people secretly pay allegiance to and take as their leader?” The Imam replied: ‎‎“I rule over the hearts of the people, while you rule over their bodies.”‎

He had intended to make it known to the people present that he was related to the Holy ‎Prophet as a cousin, and this was a source of pride for him. It so happened that Musa ibn ‎Jaafar happened to be amongst the crowd of people and he understood what Harun was ‎trying to do, so he approached the grave of the Prophet and said loudly “Salutations on you ‎Oh Prophet of God, Salutations on you Oh father!” This infuriated Harun so much so that he ‎became red in the face and without thought said “this is truly something to be proud of.”‎

By constantly reminding people of his family relation to the prophet, Harun was not only ‎trying to win their hearts but also simultaneously trying to discredit the Imams. Once he said ‎to Imam al-Kadhim: “How can you claim to be from the children of the Prophet when in ‎reality you are from the children of Ali, and every person’s lineage returns back to their ‎paternal grandparents, not their maternal.” Imam al-Kadhim replied using a verse from the ‎Holy Quran ‘...and from his (Ibrahim’s) offspring, David and Solomon, Job, Joseph, Moses ‎and Aaron. Thus, do We reward the virtuous. And Zechariah, John, Jesus and Ilyas, each of ‎them among the righteous.”‎

He went on to explain the verse sighting that in it Jesus had been counted amongst the ‎children of the previous Prophets, even though he was related to them through his mother, ‎not his father. In the same way, he explained, we (the Ahl al-Bayt) are related to and ‎counted as the children of the Prophet through our mother Fatimah.‎

Harun could say nothing in the face of this Quranic reasoning. In another similar debate ‎where Harun asked the same question, the Imam replied using a different method, he asked ‎Harun “If the Prophet were to come back to life and ask for your daughters hand in ‎marriage, would you accept?” to which Harun replied “Not only would I accept, but I would ‎boast of this honor to all the Arabs and non-Arabs” The Imam stunned him by continuing as ‎such “However, this is not true for us, nor would the Prophet ask for our daughters in ‎marriage, nor would we give them to him”, when asked why? He replied “Because I am from ‎the lineage of the Prophet, so such a marriage would be unlawful, however you are not from ‎his lineage, hence it would be lawful for you.” ‎

In another encounter between the seventh Imam and Harun Rashid took place in one of the ‎caliph’s grand palaces in Baghdad. Harun in trying to show off to the Imam about his palace ‎asked him about the owner of this majestic building, the Imam without showing any ‎attraction or giving any importance to the grandness of the building replied “this is the home ‎of a corrupt person, it is about such people that God speaks about in the Quran saying ‎‎‘Soon I shall turn away from My signs those who act arrogantly on the earth: though they ‎should see every sign, they will [still] not believe in it, and if they see the way of ‎righteousness they will not select it as [their] way, and if they see the way of error they will ‎take it as [their] way. That is because they deny Our signs and are oblivious towards them.’” ‎

Harun became so enraged that he almost lost his composure, in spite he asked again who ‎the palace belonged to, the Imam not backing down from his stance said this time “This ‎house belongs to our partisans and followers; however others have forcefully and ‎oppressively taken it from them” Harun replied “if it belongs to your followers than why ‎doesn’t the owner of this building...” to which the Imam quickly replied “This house was ‎snatched from its original owner, and whenever the original owner is able to do so, he will ‎take it back.” ‎